The british artist presents a new body of work inspired by her recent research in China. Exploring the traditional pictographic characters as encountered in street signs and commercialised logos, Finn-Kelcey appropriates them for their design and formal qualities rather than for what they actually mean. 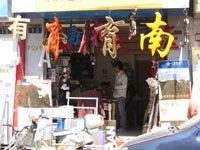 This winter, Milton Keynes Gallery will show British artist Rose Finn-Kelcey’s most comprehensive exhibition in nearly ten years. It comprises three new sculptural installations made partly in response to a recent residency and tour of China. Typically for Finn-Kelcey, the use and misuse of language provides the focus for the exhibition.

Finn-Kelcey came to public prominence in the late 70s with a series of public interventions across London that took the form of colossal flags flown over certain landmarks in the city carrying slogans and false warnings. ‘Power for the People’ was flown over Battersea Power Station at the time of workers’ unrest, and ‘Here is a Gale Warning’ seen over BBC’s Alexandra Palace. The work was laced with irony and subversive wit, and sought to disrupt conventional notions of normality and the everyday. The complex thinking embodied in her work has touched on themes as varied as power and the dilemmas of mastery, the myth of the artist, the gaining of a voice and the deceptions of value. She has consistently experimented with different media, making performances, installations and sculpture.

Recent projects have included placing chocolate vending machines alongside the Millennium Dome which dispensed prayers instead of chocolate; a series of LED ‘instructions’ directing people what and what not to do; and Angel, which took the form of huge shimmer disc panels depicting the emoticon (text message symbol) of an angel on the facade of an East London church. Rescaled as an eighty square metre mural, Finn-Kelcey’s project allowed the symbol to gain new interpretations far removed from its original source.

In her exhibition at Milton Keynes Gallery, Finn-Kelcey applies her characteristic blend of humour and pathos to investigate the nature of interpretation and re-contextualisation. Chinese characters collide and are conversely assimilated into new and alien contexts so that they are both lost and found in translation allowing the characters to develop new meanings. Appropriating street signage, fairground art and shop front hoardings, the exhibition demonstrates the extent and invention that has come to characterise much of Finn-Kelcey’s practice in recent years.
Rose Finn Kelcey’s trip to China was sponsored by the Red Mansion Foundation.