Mother. The result of this collaboration is an exploration of the associations with this monumental figure through various media, materials and narratives. Works in painting, sculpture, photography and collage analise the various sentiments, and attributions that are given to the one person who gave us life. 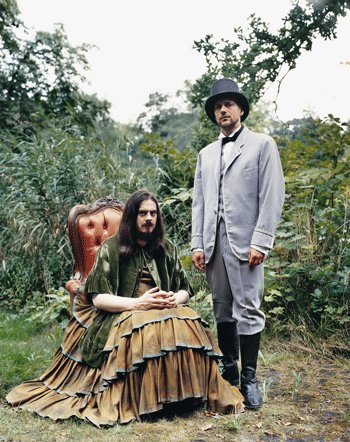 Bortolami Dayan is proud to bring to New York, Mother, an exhibition by Jonathan Meese and Tal R. The result of this collaboration was first shown at the Statens Museum for Kunst in Copenhagen in 2005 followed by The Deichtorhallen in Hamburg in 2006. For the exhibition in the gallery, German artist Jonathan Meese joins his Danish colleague, Tal R, in exploring the associations with this monumental figure through various media, materials and narratives. Housed within a giant pink castle, the artists each create unique works in painting, sculpture, photography and collage.

Initially, these artists seem like an unlikely pair. Tal R’s work seeks out fantastical stories that are replete with odd figures, animals, food and inanimate objects juxtaposed with abstract patterning and geometric shapes all rendered in a naive, self-taught style. Whereas the paintings are tableaus of color, the sculptures are pared down to their basics rendered in bronze and aluminum. Jonathan Meese’s work touches on grand narratives and heroic themes, particularly German history - figures such as Nietzsche, Wagner, self- portraits as well as film and rock stars appear appropriately rendered with a gestural and expressionistic hand. Because of the inevitable heavy associations with these figures, there are multiple points from which to approach the work, all of which are left to the viewer for interpretation.

Mother explores the various sentiments, associations, and attributions that are given to the one person who gave us life. Photographs of the artists’ mothers as well as Freudian references are incorporated within the paintings, drawings and sculptures that fill the pink fortress. The exhibition will create a very diverse and multi- dimensional view of the mother figure and explores the various emotions that she elicits.

Jonathan Meese was born in 1971 in Tokyo and lives and works in Berlin and Hamburg. This year he had a solo exhibition at MAGASIN Centre National d’Art, Grenoble and at the Frans Hals Museum in Haarlem. He was represented in the Berlin Biennial in 1998 and more recently performed in Wagner’s, Parsifal in Berlin. Tal R was born in 1967 in Israel and lives and works in Copenhagen. In 2007 he will have a solo exhibition at the Louisiana Museum for Moderne Kunst in Copenhagen. In 2002 Tal R received the prestigious Carnegie Art Award and in 2004 he received the Eckersberg Medal. He is an honorary professor at the Academy of Fine Arts Dusseldorf.