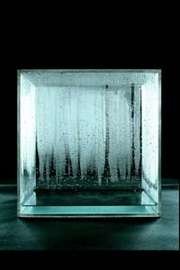 This is the first retrospective of the works of the german born artist Hans Haacke in Germany. Together with the Akademie der Kunste in Berlin the Deichtorhallen will show the main works and a new one by Haacke. Haacke's early work as a conceptual artist focused on systems and processes. His later works have dealt more with socio-political structures and the politics of art. Haacke has been outspoken throughout his career about his belief that museums and galleries are often used by the wealthy to seduce public opinion. From 1967 to 2002 Haacke was a professor at the Cooper Union in New York City.

In 1993 Haacke shared, with Nam June Paik, the Golden Lion for the German Pavilion at the Venice Biennale. Haacke's installation "Germania" made explicit reference to the Biennale's roots in the politics of fascist Italy.