An alternative art fair created by Seattle artists and dealers: second year. It features 41 galleries from the United States, Canada and London, with an emphasis on west coast galleries and emerging artists. This intimate, friendly fair made a small but significant splash in the vast Miami Beach artfest. 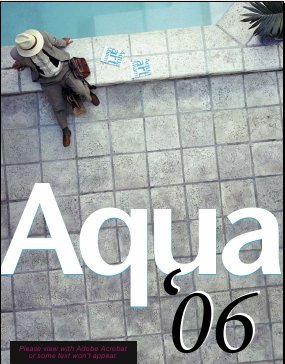 We are pleased to announce the second year of Aqua Art Miami, an alternative art fair taking place concurrently with Art Basel Miami Beach December 7-10, 2006. Created by Seattle artists and dealers, Aqua Art Miami features 41 galleries from the United States, Canada and London, with an emphasis on west coast galleries and emerging artists. The fair will take place at the Aqua Hotel, 1530 Collins Avenue - a short walk from the Miami Beach Convention Center, location of the Fifth Annual Art Basel fair.

Aqua Art Miami initially grew from a desire for west coast galleries to have greater representation in Miami during the Art Basel fair, deemed the most important contemporary art fair in the United States and drawing a large and prestigious attendance from around the world. In order to gain access to this audience, a number of alternative satellite fairs have been established along side the main fair. Aqua will once again occupy the intimate and relaxed Aqua Hotel, a two story Mid-Century Modern building with spacious rooms surrounding a breezy outdoor central courtyard area. The casual atmosphere of the hotel provides a welcome oasis for viewing contemporary art.

Aqua’s ﬁrst year in Miami in 2005 was a notable success. The Art Newspaper, which covers the festivities each day during Art Basel, ran an article on Day 2 titled "Aqua launches with a splash," and reported that, "The quality of the art on offer and the reasonable prices were pleasant surprises, [with] discoveries to be made. This intimate, friendly fair made a small but signiﬁcant splash in the vast Miami Beach artfest this year." ArtInfo.com reported, "Who knew this fair would run so much deeper than emerging artists working on paper? But bright young things were Aqua’s true siren call, and curators and collectors came in droves...." Seattle’s The Stranger noted, "The respite—the realness—privided by Aqua was palpable."

With its convenient location, shuttle service from Art Basel, free admission, and a complimentary catalog, Aqua will continue to be a refreshing addition to the other fairs and events in Miami this December.