Paradise Now! (Limbo). Sculpture, video, drawings and text. In these images, granite and moss appear to possess human features. Jackson's drive across America in search of these landforms may be seen as an attempt to come to terms with his relationship with the continent's colonial past and its environmentally rapacious present. 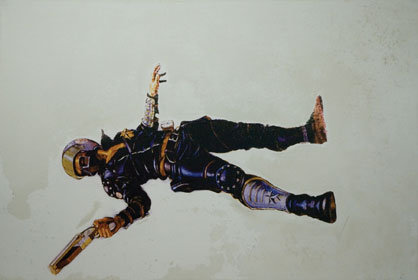 Exhibited at Cubitt alongside sculpture, video, drawings and text, Matthew Day Jackson's The Lower 48 (2006) is a series of photographs of anthropomorphic rock formations, taken on a road trip through each of the continental United States. In these images, granite and moss appear to possess human features; in these images, geology wears a human face.

Why might America - its land, its silicone substance - choose to manifest itself this way? Perhaps it is to elicit sympathy from its parasite inhabitants - a human face, after, all, is just the thing to engage a human heart. But in Bush's America the heart is either stony or sentimental - it has a fatal disregard for blood. Perhaps then, these craggy faces are antibodies, an immune system, ready to rise up from the rocks to defend the continent in the time of its greatest need (we're reminded of the replica Statues of Liberty that stand guard over many small American towns, the apocalyptic prophesies of the Lakota Sioux Ghost Dancers and King Arthur's sentinel slumber beneath Glastonbury Tor). So a body battles an infection, so a land battles its colonists. Wash, rinse, repeat.

Day Jackson's drive across America in search of these landforms may be seen as an attempt to come to terms with his relationship with the continent's colonial past and its environmentally rapacious present. We might read it as a carbon junkie's last fix, or a four-wheeled walk of shame, or else a pilgrimage in search of new formal structures - of a new, redeeming faith. Absolution, however, is never easily won, and for the Survivors of the coming Apocalypse, there are brutal lessons to be learned.

Matthew Day Jackson's 'Paradise Now', a prelude to his Cubitt exhibition, was held at the Portland Institute of Contemporary Art in 2006. He has recently participated in the group exhibitions 'USA Today: New American Art from the Saatchi Gallery' (2006) at the Royal Academy, London,'Uncertain States of America' (curated by Daniel Birnbaum, Gunnar B. Kvaran and Hans Ulrich Obrist) at The Serpentine Gallery, London (2006), and 'Day For Night: The 2006 Whitney Biennial' (curated by Chrissie Iles and Philippe Vergne).