Photography - Media Art. This year’s focal point presents works from artists who not only use the medium of photography but also combine it with other mediums, artists whose concept over the years has followed this mixing of photography with other art practices. The gallery collective has invited: Gerda Lampalzer & Manfred Opperman, Eva Schegel, alian productions. 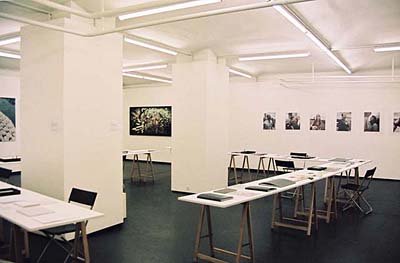 This year’s focal point presents works from artists who not only use the medium of photography but also combine it with other mediums, artists whose concept over the years has followed this mixing of photography with other art practices. We have also thought out for the first time for Crossover, in the sense of a border crossing, a shared project authorship. The gallery collective has invited three Austrian positions (Gerda Lampalzer & Manfred Opperman: photography-film, Eva Schegel: photography-painting, alian productions: photography-media art). These artists were requested to invite another artist in order to help expand and congeal the theme.

Both artist cooperatives alien productions (Martin Breindl, Norbert Math, Andrea Sodomka) and Machfeld (Sabine Maier & Maichael Mastrototaro) were given a concept from the Fotogalerie Wien’s Crossover for a shifting of positions to radicalization but also a sign that media art does not stand for the most part as a solitary artistic effort but as a collaboration. Which in their case is an essential part of the strategy, all alien production and Machfeld can be is encompassed under the title CROSS TALK a joint installation using all rooms in the gallery.

The installation consists of 3.1. (three to one) modules, whereas each room of the gallery becomes one field of perception out of which a so-called reality is constituted. The big exhibition room is dedicated to the picture the small room to text and the cinema only to Sound. As .1-Module functions as the electronic radio room of the ORF(Austrian State Radio) art radio the installation (in a live emission) as transmission of networks and radio apparatus diffuses.

alien productions and Machfeld construct on one hand a complete virtual media environment, of which the starting point is the digital domain as it is produced in a variety of software programs (3d- animation, text to speech generators etc.). On the other hand they are explicitly influenced by technique and media history where the newly produced images sounds and texts are spatially perceptible through ‘old media" like the simple mirrored effect of stereoscopic projections or the speaking stylus or classical sound wave effects as a construction of reality from a virtual environment.