Exile of the Imaginary

Politics / Aesthetics / Love. The Lover's Discourse (1977) by French philosopher Roland Barthes offers a theoretical basis, and also lends the exhibition its title. A show specifically devoted to this thematic and featuring works of a younger generation of artists who distinguish themselves through conceptual practices. Curated by American art historian Juli Carson. 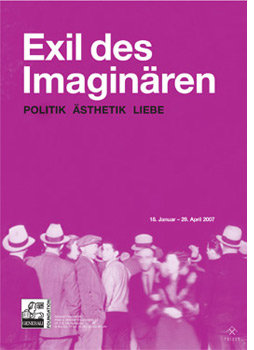 Can love be a critical "medium" in politically turbulent times? The exhibition Exile of the Imaginary conceived by American art historian Juli Carson focuses on this question. The Lover’s Discourse (1977) by French philosopher Roland Barthes offers a theoretical basis, and also lends the exhibition its title. The book confronts us with a montage of texts from the author and from world literature on the discourse of love. The order of the "fragments" follows the alphabet, but otherwise, they are selected subjectively. The author himself introduces this book as a "portrait" not in a psychological but in a structural sense. Consequently, the critic is analyst and subject of analysis in one. Juli Carson now reflects upon this co-presence of a (quasi-) scientific procedure and subjectivity, in an exhibition specifically devoted to this thematic and featuring works of a younger generation of artists who distinguish themselves through conceptual practices.

What would it mean, then, to combine Barthes’s assertion about love with that of Conceptualism as a means of a larger cultural/aesthetic critique? Perhaps it would establish a type of "Conceptual Unconscious," a critical, psychoanalytic site of contemporary art production. This is precisely what a select group of artists are engaging in today, a practice that Exile of the Imaginary presents and analyzes. In each of the individual artworks, the question of desire is the vehicle for approaching the actual subject matter: a specific cultural event. Each artist becomes an analyst, taking up this allegorical operation in different ways to interrogate art as a critical agent for social change. Thus, the dialectical division between "political" and "lyrical" genres dissolves.
Following Barthes’s lead, the artists take a poetic surrealist approach to their subjects to arrive at critical statements on the relationship between today’s art and politics. In doing so, they engage the semiotic lessons of Conceptualism without affirming the movement’s rationalist, analytic claims. From this vantage, subjects as diverse as electoral politics, immigration laws, the Vietnam War, racism, cultural translation, and institutional critique are taken up in the equally diverse mediums of sculpture, performance, song, film, video, and photography.

The Generali Foundation opens the exhibition year as is traditional with a thematic exhibition put together by a guest curator. Juli Carson is art historian, art critic, and curator and teaches at the Department of Art of the University of California, Irvine, where she is also director of the University Art Gallery. Since 2004 she is co editor of artUS. Her essays have appeared in Art Journal, Texte zur Kunst, Documents, and October. In collaboration with the Generali Foundation Vienna, she curated the archive section of the exhibition project Mary Kelly. Post-Partum Document in 1998.

The work of Adria' Julia' has been produced in cooperation with SEACEX (The State Corporation for Spanish Cultural Action Abroad).