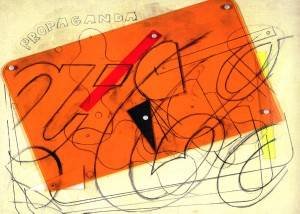 Sperone Westwater is pleased to announce an exhibition of historical paintings from the 1960s by Mario Schifano (1934-1998).

A radical figure who considered painting to be the true frontier of the avant-garde, Schifano was one of the few European artists included in the “New Realists" exhibition at Sidney Janis Gallery in 1962, the groundbreaking international survey of contemporary Pop and related movements. However, aside from this early exposure in New York, Schifano and his work remain relatively unknown in this country.

In the 1960s, Schifano began painting monochromes using enamel house paint as his medium, a revolutionary use of non-traditional art materials that aligned the artist with his Arte Povera colleagues whose work developed later in the decade. Schifano was also interested in television and the moving image and believed that the future of painting lied therein. According to Luca Beatrice, “Schifano sensed that painting should be seen with a contemporary eye and, after its aura is removed, needs to be hurled into the indistinct flow of words, sounds, and images—what constituted the very lifeblood of post-war culture." Many of his canvases from the 1960s present a square shape of color, itself a reference to a television screen, with drippings, gestural expressions and traces of dirt to remind the viewer that these are indeed paintings, in contrast to the flat monochromy favored by other European artists at the time.

After abandoning his successful cycle of monochromes, in 1964 he started working in the genre of landscape, continuing to experiment with materials and process, composition and style. In these works, Schifano emptied the space of the painting by introducing fragments of plastic materials—perspex boards ‘bolted’ onto the canvas—which suggest an interest in a broader concept of painting contaminated by the new technological age. As Beatrice writes, “Schifano’s approach, which was always directed towards the avant-garde and breaking out of the box, is typical of an artist who certainly detected a lesson, but also a limitation, in painting." Schifano also used writing in his work, incorporating cursive and block letters along with co-opted iconic text like the Coca-Cola logo, in ways that parallel Ed Ruscha’s work of the same period. The early body of work on view in the exhibition clearly indicates Schifano’s significant contribution to post-war painting and the artist’s radical techniques that anticipated several art movements to come.

The exhibition and accompanying catalogue were curated by Gian Enzo Sperone and Giorgio Marconi, two veteran Italian dealers who showed Schifano’s work in Italy during the 1960s.

Sperone Westwater is pleased to announce an installation of new sculpture by Italian artist Nicola Bolla. This new group of objects, like Bolla’s previous Vanitas series, is made entirely of beaded Swarovski crystals.

For his second solo show in New York, Bolla has created a provocative installation of sculptures that evoke the contents of a prison cell. A rope with a noose hangs from the ceiling above a chair and bars block the entrance to the Terrazzo Gallery. Each of these objects is carefully rendered completely in sparkling Swarovski crystals, a contradiction of form and content that represents the purpose of Bolla’s art. The artist has said about his work: “The symbol that represents these objects is both metaphor and metamorphosis," explaining how these natural elements rendered by artificial means make everyday objects appear ephemeral. According to Alberto Fiz, “Bolla invites us to reflect on a world constructed around the beauty and appearance of objects and in his works made of crystals, the jewels hide a deep sense of melancholy."

Born in 1963 in Saluzzo and the son of a painter, Bolla currently lives and works in Torino. A practicing opthamologist and eye surgeon, Bolla lives a kind of double life, practicing medicine by day and working in his studio after hours, creating objects of tremendous beauty and peculiar contradiction.

A catalogue with full-page color reproductions accompanies the exhibition.

For more information as well as photographic images, please contact Molly Epstein at Sperone Westwater at (212) 9997337, or info@speronewestwater.com.