Working as a draftsman, Schimansky moves his brush, his pencil, or his pen over sheets of paper from the size of post-cards as well as large formats. In a balance between randomness and control, he seeks the energy that is produced by the pressure of his hand on the paper with its vibrations and rhythm. 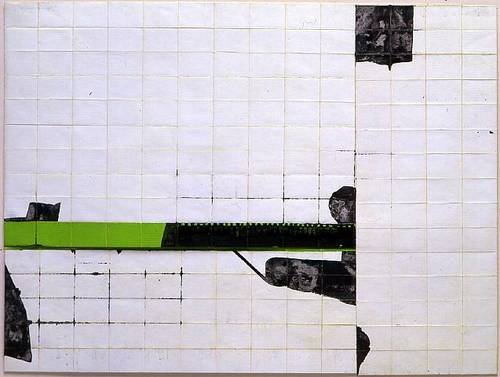 Already well known in Germany, the work of Hanns Schimansky has yet to be discovered in France. The Karsten Greve Gallery is pleased to present a selection of his recent works. Working exclusively as a draftsman, Hanns Schimansky moves his brush, his pencil, or his pen over sheets of paper from the size of post-cards as well as large formats. In a balance between randomness and control, he seeks the energy that is produced by the pressure of his hand on the paper with its vibrations and rhythm.

The more or less geometric shapes and frail or incisive lines make up a vocabulary of elements that are assembled according to different combinations on the sometimes previously folded paper. From left to right, from top to bottom or backwards, the network of lines creates a very open form of writing that unrolls, is cut across with color, with spots and painted surfaces. A history thus unfolds with its breaths, its quickening of pace and its timbre: that of lines that crossor avoid each other, fields of color and pathways that link them together.

These kinds of “scriptural landscapes" evolve within a particular space. The back and the front of the paper meet each other and transgress the boundaries of within and without. The partially folded paper, which keeps the horizontal vertical framework of its folding, preserves the cracks and hidden spaces with different framings.

You have had numerous important exhibitions (Neuchatel, Staatliche Kunsthalle Karlsruhe, Sprengel Museum) and you teach at the Academy of Fine Arts in Berlin (Weissensee). In France, we are just now discovering your work on the occasion of your exhibition at the Karsten Greve Gallery. By way of introduction, can you cite the artists that have influenced you in the past and who influence you today?

HS: Art always begins with borrowing. Up until my forties my encounters with modernity were limited to a few strong impressions. When I began, the artists with a certain notoriety in East Berlin were interested in the French painters of the end of the 19th and beginning of the 20th centuries like Ce'zanne, Bonnard, etc. At that time I was interested in Georges Grosz. My friendship with Paco Knoller brought me knowledge of the movements in contemporary art and above all, the graphic work of his professor Josef Beuys, which touched me deeply. My astonishment in the face of the works of Klee, Miro', and later of Twombly, Guston, Marden or Winters has likewise always followed me.

Born in East Germany in 1949, you have been questioned often about this identity, to which you habitually reply “Couldn’t you ask me another question?"

HS: My parents left Austrian Bohemia for East Germany (Ostsee) after World War II. I grew up there. My agricultural studies and subsequent farming experiences, working for five years in a wheat cooperative, allowed me to attentively observe vegetal development and register the quotidian “adventures of landscape". My life in Berlin began with the scholarship I received for the Fine Arts Academy. At the time East Berlin was already a big city. I think that being anonymous; the rhythm of a capital and the almost physical competition with others is decisive.

You devote yourself solely to drawing. Without emphasizing technique, how do you proceed?

HS: At the beginning I drew almost exclusively with pencil, landscapes but also portraits. The memories of these shapes remained with me. Later, a reduction took place in ink drawings and their resulting surfaces: I began to minimize the means while maintaining a productive and charged space. There are boundaries, zones of off-center energy, unstable balances and tensions between the support and the line. Immediacy as a way of life! I try to capture and prolong the elusive intensity of the moment in my drawings, in an equivalence lets say, that is diffused. Even the large formats are done in a single breath. The present moment counts, with its aberrations and errors. Tomorrow the constellations will be different.

What does it mean to be a draftsman today?

HS: I can speak of my own experience, of opposing something to this dizzying world of media. Downshifting. For me, drawing is a concerted manipulation of the support. Each affirmation can deliberately contain its contrary, which is also true. Linear elements and non-linear processes, the organization of the space, the conditions of the moment, detailed observation, contemplation, etc., the action comes from what is visible. You have to find where to begin the game. Along the way, unexpected events take place. I try to invent a code, either dense or uncluttered in order to give air to the structure of associations.

Color appeared late in your work, but from around the year 2000 it imposed itself, bright and explosive. What was your path to this?

HS: Color amplifies the graphic energy of drawings. My relationship with color is very direct. I confess, quietly, that there are other things that come into play with color: the warmth of a red, the cold of a blue and the interval of temperatures.

Do you perceive a narrative dimension in your drawings, a story - which is often told through the folds in the paper - of lines, light touches, the creased paper that trembles?

HS: The technique of the folds that I have developed over the past 20 years is slow and uncertain, but it offers rather complex solutions. I would cite The Fold by Deleuze. The spatialization of a drawing is created with the paper. Wait for chance, provoke it and aim well. In a sheet of paper that is folded in this way, both the back and the front are drawn on and cross each other. Large parts of the drawing are closed in, while the part that is visible forms a new work.
Fragments appear between the different frames. These are relative correspondences. You have to make a choice among the prolific possibilities that then exist. The issue is that the line and the color enter into a tension with one another. Fragmentation produces elements that the observer animates with respect to their own experience. They thus take the work beyond my influence.

How does the very singular space of your drawings interact with the exhibition space?

HS: Each exhibition is composed with precision - silent or noisy, light, dark, big, small. It follows a choreography that is properly determined for the space. The hope and the surprise of each exhibition are held by the use of the graphic forces in the space, which is a unique and ephemeral combination just as concepts are. The drawing exists unto itself, but the combination of the whole remains largely unknown. In my studio I can control the space and the interaction of the works. My drawings also have conceptual and intuitive genes.