For his first one-person exhibition in the U.S., Fabrice Gygi, a European shooting star transformed the Swiss Instituteâ€™s gallery space into a polling station. Fabrice Gygi conceives his works in the same way that a dealer in illegal goods displays his objects in the street. 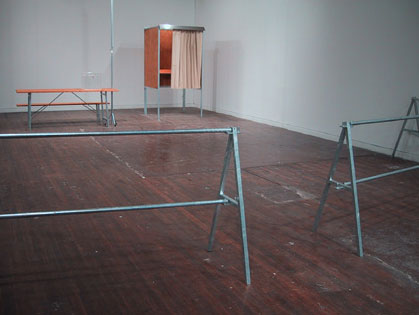 For his first one-person exhibition in the U.S., Fabrice Gygi, a European shooting star transformed the Swiss Instituteâ€™s gallery space into a polling station. Fabrice Gygi conceives his works in the same way that a dealer in illegal goods displays his objects in the street. He needs a mobile structure that can vanish in the wink of an eye and reappear just as quickly elsewhere. Not seen, not captured, but always there. A structure too heavy, too static, and he is dead, he disappears. As in his first exhibitions, Fabrice Gygi still works with canvas tarpaulins, fitted pipes, inflatable modules, and wire mesh. He utilizes, for example : protective mattresses, which he attaches around columns or along handrails ; tents for covering a tribunal ; sand bags placed at the entrance to a museum ; fences made of tarpaulins that form a barrier. Besides the elaboration of a remarkably coherent plastic language, the great force of Fabrice Gygiâ€™s work resides in an ambiguity never quite resolved in his proposals. Is a podium made of grey-green canvas and wood designed for the use of wealthy generals, who have at their disposal a little sentry box hastily constructed for viewing a march of troops in the Valais Alps ? Or is it perhaps a mobile space for surveillance, where those same generals, taken prisoner by guerrillas, are being "exhibited" before entering the tent-tribunal ? But who decides : a representative of authority or of the resistance ? Is this before or after the coup dâ€™Ã©tat ? The work shown at SI: a kit for voting with booth, ballot box, crowd barriers, benches, notice boards, flagpole, etc., shares the same ambiguity. For whom are we going to vote? Is there really a choice? Is it just an installation to please the media, as the die is already cast. Or is this kit a standard model of what should be a fair voting? Anyway, it's hard to decide. This state of indecisiveness makes such a work not pleasant at all, not friendly-user or relation oriented. Fabrice Gygi doesn't care. Attempts have been made to define art by its capacity to generate exchange, to â€œinhabitâ€ the everyday, to forge links between different segments of reality. Certainly, much of todayâ€™s art tastes â€œrealâ€ but, just as Canada Dry is not whiskey, so art is not reality. Or rather art, which is always furtive, constitutes a parallel reality. Artists like Gygi are not obsessed with organizing neighborly, even fruitful relations between these two realities. Never there where you expect them, they are constantly developing transfer movements, activating energy vectors and the constant oscillations that undermine our systems of interpretation.MOW

We all try to keep up appearances. We all operate within certain conventions, but we canâ€™t control everything. Sometimes we smell and look like shit. Gas gets passed and pimples unexpectedly come. We can accept all of these things so long as they are maintained. Once maintenance ends, subversion begins. TM