His sculptural use of audio in films, as well as in standalone audio pieces, further serves to reveal the slippage between heightened perception and distended reality. Often seemingly naturalistic and in context with the sustained moments playing out on the screen, audio is carefully manipulated to create a specific sonic location simulacra. 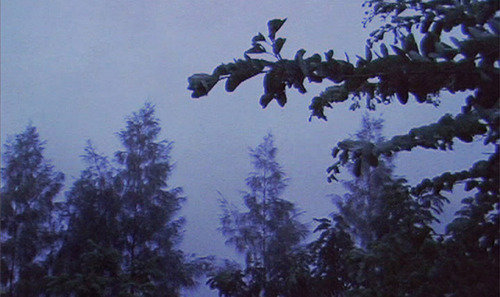 Somewhere, Someone is doing this

In Marshall’s practice, the circumscribed way we typically perceive our world is short-circuited or inverted, and peripheral disquiet is emphasised: the detached, ‘uncanny’ qualities of reality ingrained in the ‘non-moments’ of the everyday, the granular static of potential, the background glitch and hum of human experience.

‘Any film wraps us in uncertainty, the longer we look through a camera or watch a projected image the remoter the world becomes, yet we begin to understand the remoteness more.’ -Robert Smithson, Collected Writings. ‘Sometimes, when taking a picture I imagine the world to have formed in the same way as a photograph, through a process of crystallisation in response to light.’ -Mike Marshall.

Abandoning the structural artifice inherent in narrative, Mike Marshall’s multidisciplinary practice brings to the fore that which would normally inhabit the perceptual peripheries, or be omitted entirely. Here, through sustained sensory engagement with half-registered moments in unspecific locations, the process of reception is distended, the viewer moving into a deeper, less complacent, more physical relationship with what is seen and heard. Full reign is given to the implication that under certain circumstances, what often appears to be ‘dead-air’, a non-event, or a prolonged pause in the drama of the everyday, can become almost too intense: moments in which we are incontrovertibly invested in a reality anterior to language.

Marshall’s sculptural use of audio in his films, as well as in standalone audio pieces, further serves to reveal the slippage between heightened perception and distended reality. Often seemingly naturalistic and in context with the sustained moments playing out on the screen, audio is carefully manipulated to create a specific sonic location simulacra: ground level jungle insect frequencies are enhanced in favour of canopy sounds in the contradictorily entitled Birdcatcher (2006) for instance, to approximate the experience of being inches from the green undergrowth. Audio from completely alien, yet feasible contexts can also be assimilated into the soundtrack, conflating the diegetic and constructed, and by extension exactly where in space and time we are located. Marshall further destabilises our grip on locality through his metaphorical titling: often alluding to a provisional situation or reading, yet remaining vague, and open to contravention.

‘There’s a lot of emphasis on the air in Marshall’s art. What it argues, through the auspices of its variable media and subject matter, is that our environment isn’t comprised merely of consensually interesting items punctuated by blank intervals. It is continuous, crammed with significant molecules, changeable - and all potentially remarkable, provided one’s perceptual capacities are not choked by the bindweed of inertial habit.’ -Martin Herbert.