In the early 1960s, Op Art and kinetic art showed a strong interest in objectivity and in scientific experiment. Their large-format paintings, objects, and environments do not, however, simply set the viewer's eye in motion. The interaction between the work and the viewer climaxed in installations that not only unfolded physical effects in the form of afterimages, vibrating colors, or the flickering of light but affected the entire consciousness. Works by Victor Vasarely, Bridget Riley, Francois Morellet, Julio Le Parc, Gianni Colombo, and many others. 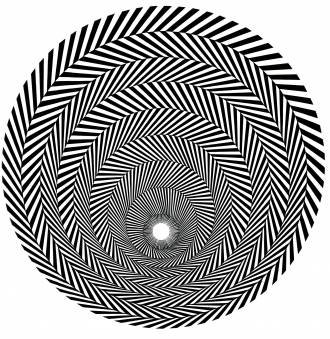 The emergence of Op art and kinetic art in the early 1960s evinced a strong interest in objectivity and in scientific experiment. Fascinated by the physical laws of light and optics, a whole generation of artists devoted themselves to exploring visual phenomena and principles of perception. Probing the possibilities of optical illusion, Victor Vasarely, Bridget Riley, Francois Morellet, Julio Le Parc, Gianni Colombo, and others deliberately aimed at producing visual irritations. In large-format paintings, objects, and environments, they caused more than the observer’s eye to move. Their works immerse their viewers in color, plunge them in the infinity of mirrors, or offer them a poetic play with light. The interaction between the work and the viewer fulfills itself in installations that not only entail physical effects in the form of afterimages, vibrating colors, or flickering light but affect the entire consciousness.

Max Hollein, Director of the Schirn Kunsthalle Frankfurt: “The strong interlinkage of artistic creation and scientific cognition is just one of the essential subjects of modernity which has entered the canon of the more and most recent art after its articulation by Op art. These achievements have frequently been attributed to other movements, and it has often been forgotten that Op art was a revolutionary art in revolutionary times."

Martina Weinhart, curator of the exhibition: “A historical look back offers a wider view of an art that developed a whole universe from the given possibilities of perception although it cannot be reduced to this aspect. The story Op art tells is one about looking as a transgression, about the eye as an active organ granting an extension of cognition, about leaving traditional visual aesthetics behind, and about a world that cannot really be grasped through one’s eyes in its multi-dimensional character. This can hardly be considered an insignificant heritage for today’s visual culture."

Op art plays with the viewer’s sensory premises. It is an art which deliberately demands too much of the eye. Overloading the human visual organ results in contrast effects, halations, suggestions of movement in space, simultaneous color effects turning black-and-white pictures into color images (where the viewer’s perception alone provides the color). The strategies of Op art prevent an adaptation of the eye and insert themselves between seeing and understanding. It makes us see things that are not even there and thus provides a “critique of consciousness." A process of seeing that stabilizes itself and can never be perfect conveys the idea that pure seeing must remain an illusion. Speaking of “optical effects" describes the issue only superficially. The approach aims at an experience of the limits of perception that clearly goes beyond seeing, at becoming aware of one’s sensory and psychological apparatus - a process which not only includes the body but also comprises the intellectual dimensions of reception.

In the mid-1960s, Op art flourished in both Europe and America with centers not merely in Western Europe and the USA but also in Eastern Europe and Latin America. Thus, Op art is one of the few trends in art with a global dissemination including the most diverse political and cultural contexts - a fact not least resulting from the universal character of its artistic means and furthered by a form of perception which, first of all, requires only little apart from an open eye. Op art makes do without any preliminary knowledge and grants a spontaneous experience of the artworks presented.

The exhibition “Op Art" at the Schirn offers a major survey of its most important positions without distinguishing between two-dimensional pictures and three-dimensional objects. The argument for exploring Op art and kinetic art together is primarily based on the observation that this art is something that cannot be pinned down. Only an overview of the various media can disclose the concept of a form of painting encompassing space, embracing the environment, and only establishing itself in between the picture and its viewer. Op art and kinetic art are interested in the idea of “pictures" which affect the viewer by combining mechanical and optical movements and not focusing on the existence of form or material. Various aspects overlap: the mechanical, actual movements, the optical movements resulting from changes of the viewer’s position, apparent movements due to perception effects such as a flickering between the lines, and, finally, perceptual movements through reverse effects in the picture. In addition, the different phenomena blend into each other. Frequently, the hybrid character of the movement’s form already springs from the immaterial nature of three-dimensional visual objects such as Jesu's Rafael Soto’s “Vibration Structures" or Yaacov Agam’s “Tableaus transformables" - convertible pictures that the viewer is called upon to reconstruct with his or her hands.

The presentation centers on large-format pictures and extensive installations since visual effects of works that are aimed at integrating the viewer depend on size to a high degree. Their hypnotic and pulsating effects increase when they occupy large parts of the visitor’s field of view; the artistic means employed by Bridget Riley, Richard Anuszkiewicz, or Francois Morellet certainly mark a peak in this respect. The dimensions that conquer the viewer’s entire optical field, as it were, sometimes turn into an overpowering strategy (a perceptive compulsion). The Op artists’ large-size paintings, environments, and installations not only set the observer’s eye in motion: the interaction between the work and the viewer - a central topos of contemporary art - culminates in installations that affect the whole being and not just produce physical effects in the form of unexpected afterimages, color vibrations, or flickering light. The interaction between picture and viewer unfolds the background for a significant new aesthetic approach: Op art replaces thinking in objects by thinking in spaces.

Installations such as Gianni Colombo’s “After Structure" (1964-67), Davide Boriani’s “Ambiente stroboscopico" (1967), or Julio Le Parc’s “Lumie're en vibration" (1968) integrate the viewers and aim at a comprehensive intervention of their senses. Confusing one’s notion of the space and causing disorientation, Christian Megert’s impressive “Spiegelraum," realized for the “documenta 4" in 1968, makes the viewer feel as if tumbling into something bottomless. Carlos Cruz-Diez with his “Chromosaturation" (1965) or Otto Piene with his light spaces pursue a more contemplative dimension of spatial art and surprise the visitor with this form of art’s multiple possibilities and wide range of variations. The exhibition assembles a total of nine sensually spectacular environments, some of which will be on show for the first time since the 1960s.