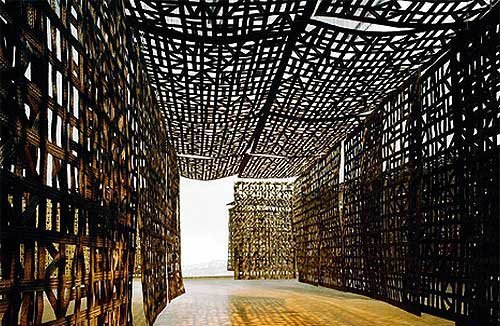 The Galeri'a Elba Beni'tez presents the work of sculptor Cristina Iglesias (San Sebastia'n) for the first time at its exhibition space. The Gallery’s programme features an ongoing exploration into areas of artistic practice which enter into dialogue with other disciplines, as is the case here of sculpture and architecture. Consequently, this exhibition focuses on those projects by Cristina Iglesias, chosen from her extensive and wide-ranging output, specifically designed to be permanently housed inside previously constructed spaces.

Cristina Iglesias developed a highly individual voice in the European and American sculpture tradition of the 80’s and 90’s, sharing a certain theoretical framework with her fellow sculptors. In her sculpture no reference whatsoever is made to the human body, but rather to nature and landscape. Starting from texts evoking places, she builds performative spaces that tempt us to penetrate them, despite often being inaccessible. She confers special importance to the spectator, since her artworks require walking and active viewing. The light, another extremely important factor in her work, moulds the rich variety of her chosen materials, which include braided iron, copper, photography and alabaster, to mention a few.

Her individual spaces -such as her Celosi'as (Lattices/Jealousies), Pasajes (Passages) and Habitaciones Vegetales (Vegetable Rooms)- are inserted into already existing exhibition spaces. These artworks are designed to be explored by the spectator, and they exploit the interplay of light and shadow to confuse outer and inner space. This interplay of light has become a key factor of her oeuvre; in her suites of silkscreen prints on copper this interplay is provided by reflections which lead the spectator into a virtual space. This effect is further heightened in those artworks featuring text, now becoming an integral part of their structure as the light projects the words onto the walls and the floor. In this manner, Cristina Iglesias’ work transports us from a tangible world to an imaginary one, emphasizing the dichotomy between natural and artificial, real and virtual.

Cristina Iglesias was awarded the Spanish National Prize for Visual Arts in 2000. In 1993 she was chosen to represent Spain at its Pavilion at the 45th Venice Biennale. One-person shows of her work have been displayed at major art venues, such as the Guggenheim Museums in New York (1996) and in Bilbao (1998), at the Museo Nacional Centro de Arte Reina Sofi'a (1998), the Carnegie Museum of Art in Pittsburgh (2000), the Carre' d’Art, Muse'e d'Art contemporain in Nimes (2000), the Serralves Museum of Contemporary Art in Oporto (2002), the Whitechapel Gallery in London (2003), and more recently at the Ludwig Museum in Cologne (2006).

The Cristina Iglesias exhibition at the Galeri'a Elba Beni'tez breaks eight years of the artist’s apparent silence in Madrid, and it does so by focussing on projects which have in common the fact of being commissions for permanent installation in previously constructed spaces -both public and private- in which the spectator experiences the architectural and the sculptural as concurrent, connected spaces.

The following five projects are on display inside the gallery:

Deep Fountain, in Leopold de Wael Square, Antwerp. This is the oldest of the projects presented at this exhibition. Commissioned in 1997, it was eventually inaugurated in September 2006. This project was made in collaboration with the Paul Robbrecht and Hilde Daem architects studio, which was also responsible for remodelling the Leopold de Wael Square. The fountain is located in the square facing the Royal Museum of Fine Arts, the facade of which is reflected in the fountain when full.

Lobby of the American Express Building in Minneapolis (2000). Her work for the entrance hall of the building consists of a suite of copper silkscreen prints running along 60 metres of wall which uses a film sequence effect to confer the space added depth.

Cristina Iglesias’ commission by the architect Josep-Lluis Mateo for the Foyer of The International Convention Centre of Barcelona (erected for the Fo'rum 2004) consisted of a 15 x 3 metre large hanging lattice. In this piece she applied a new material -using braided steel for the first time- to concepts explored in her previous projects such as Pasajes. Large canopies hang from the ceiling bearing texts taken from “The Drowned World" by J. G. Ballard, which are projected by the light onto the floor below.

The two Habitaciones Vegetales (2005 and 2006), the models of which are on display in the gallery, are projects for private gardens. Two labyrinthine structures, made of resin and bronze dust, depict a fictitious nature nestling in the midst of artificial nature.

The Door and entrance to Jero'nimos’ Cloister, part of the Prado Museum extension designed by Rafael Moneo, is her most recent commission (2006-2007). According to the artist, “these doors are a sculpture, a complex piece, both passageway and threshold, which invades part of the facade and forms several different spaces when each panel is opened… The motif is a large vegetable design which sparks off a dialogue between Moneo’s platform and a geometric garden, of box trees, which hovers over the Botannical Gardens". (1)

Outside the gallery, in the courtyard, is one of the Corredores Suspendidos (Hanging Corridors) which Cristina Iglesias exhibited for the first time at the Ludwig Museum of Cologne, in 2006. Like some of her other lattices, the Corredores Suspendidos are made from flat screens bearing texts taken from “The Crystal World" by J. G. Ballard: “I use the screens to construct the sculpture, the volume, and the texts to set in motion a kind of articulated, inner narrative. I employ the play of light, which casts shadows that invade the floor and occupy the space, as a way of demonstrating a reflection on sculpture and its relationship with the space, which is one of the main concerns of my work".

(1) Cristina Iglesias in an interview with Miguel Ferna'ndez-Cid for the El Cultural supplement of the El Mundo newspaper, Thursday 25 January 2007, pp. 34 to 36.
(2) Ibid.

Publication: The Galeri'a Elba Beni'tez is preparing the publication of an in-depth survey of these projects and an analysis of sculpture in constructed spaces.