Photographs from the National Gallery of Art. The show presents images revealing the transformation of the French capital city and the art of photography from the mid-19th to early 20th century. Organized from the perspective of a flaneur - an aimless wanderer - it includes photographs by Eugene Atget, Andre' Kertesz, Brassai, Alfred Stieglitz and others. Curated by Sarah Kennel. 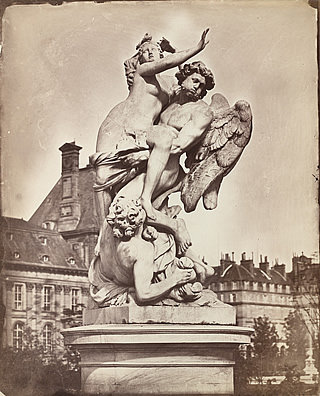 Photographs from the National Gallery of Art

Paris in Transition: Photographs from the National Gallery of Art presents 61 of the Gallery’s photographs revealing the transformation of the French capital city and the art of photography from the mid-19th to early 20th century. The exhibition, organized from the perspective of a flâneur—an aimless wanderer, will be on view in the ground floor photographs galleries of the West Building from February 11 through May 6, 2007. It includes photographs by Eugène Atget, André Kertész, Brassaï, Alfred Stieglitz and others.

The exhibition, organized by the National Gallery of Art, is made possible by the generous support of Edward J. Lenkin. “The exhibition celebrates the delightful visual riches of the French capital and explores the ways that photographers have sought to capture the romantic and nostalgic aspects of the city,” said Earl A. Powell III, director, National Gallery of Art. “We are most grateful to Mr. Lenkin for his support.”

Beginning with images of the city’s streets and architecture by photographic pioneers William Henry Fox Talbot, Gustave Le Gray, Auguste Mestral, Charles Nègre and others in the 1840s and 1850s, the exhibition highlights the central role that Paris played both as subject matter and as a base for a burgeoning French school of photography. Photographs include Talbot’s Boulevards of Paris (1843), Nègre’s Market Scene at the Port of the Hôtel de Ville, Paris (1852) and Édouard-Denis Baldus’ photographs of the Louvre.
Featuring photographs by Charles Marville, Louis-Émile Durandelle, Hippolyte-Auguste Collard and others, the exhibition also explores the urban transformations of Paris in the 1860s and 1870s under Napoleon III and his chief urban planner, Baron Haussmann. In the middle of the 19th century, Haussmann undertook a massive program to modernize the twisting alleys and narrow streets that characterized medieval Paris by creating spacious boulevards, wide sidewalks and large parks suitable for the leisure pursuit of an emerging bourgeoisie class, as well as furnishing the streets with modern conveniences such as streetlamps and information kiosks.

Marville, named Paris’s official photographer in 1862, was commissioned to document the streets and buildings of “Old Paris” slated for destruction. In Rue Saint Jacques and Rue de la Bûcherie (both 1865-69), Marville recorded the city’s disappearing neighborhoods. But in Hôtel de la Marine (1872-76), he celebrated one of Haussmann’s achievements: the installation of one of the thousands of gas lamps that made Paris “the city of light.”
Other photographs convey the energy of modern Parisian life, including Nadar’s Self-Portrait with Wife Ernestine in a Balloon Gondola (c. 1865) and Collard’s photographs of construction projects near the city.
The exhibition highlights Eugène Atget’s photographs of turn-of-the-century Paris. Training his camera on shop windows, sparsely populated streets and quiet parks, Atget presented Paris not as a geographical entity but as a series of individual spaces.

The Gallery’s collection of Atget’s photographs reveals his eye for the details of daily Parisian life, offering a contemplative and often romantic vision of the city that influenced later photographers. This section also presents photographs by other artists who were drawn to Paris during this time, including American photographer Alfred Stieglitz.
The exhibition closes with an examination of a new school of Parisian photography that emerged in the 1920s. Émigrés to Paris, André Kertész, Germaine Krull, Brassaï, Ilse Bing, Jaroslav Rössler and others were energized by the modernist culture that shaped Paris in the 1920s. Their work shows Paris as a pleasurable contradiction, offering by turns the comforts of nostalgia and the vertigo of modernity.

National Gallery of Arts
6th Street and Constitution Avenue - Washington
Open Monday through Saturday from 10a.m. to 5p.m. and Sunday from 11a.m. to 6p.m.