The first of two exhibitions showcasing new work developed during their residencies by eight artists participating in the 2006-2007 International Residency Program. Featured works, some of which are exhibited as work-in-progress, represent a diverse range of artistic approaches. 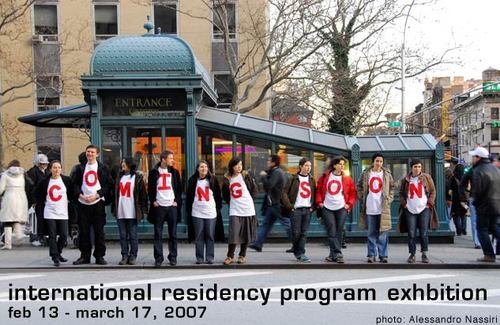 Location One presents the first of two exhibitions showcasing new work developed during their residencies by eight artists participating in the 2006-2007 International Residency Program. Featured works, some of which are exhibited as work-in-progress, represent a diverse range of artistic approaches:

Natalie Bewernitz & Marek Goldowski (Germany) Unveiled Presence (secret sounds 2)
Natalie and Marek’s intermedial video and sound installations are a theoretical and practical attempt to map the possibilities and limits of depicting identity, individual personality and existence in its physical, spiritual and psychological dimensions. Mapping out these characteristics is achieved in the form of interactive and multi-channel installations that deal with the perception of space and sound, and are realized with computer-based self-generating sound creation in real time.

The conceptual premise for Natalie and Marek’s new work is Marcel Duchamp’s ready-made Bruit Secret (New York, 1916). The work contains an object in its center, and Duchamp never knew what it was. It only reveals its presence by shaking the work. With this in mind, Natalie and Marek have recorded secret sounds of the City, which constitute the backbone of this installation.

Teresa Henriques (Portugal) Drawing in Space
Grasping the concept of “Perception” is the focus of Teresa’s body of work. Drawing, geometry, philosophy and optical phenomena are the parameters of her investigations. For this new work Teresa used the open-source animation software, Blender, which she acquired during her residency at Location One. The resulting 3D line drawing/object evolves out of the artist’s extensive research into drawing by women artists in the 20th and 21st centuries. As one walks around the work, two different view points reveal themselves to the spectatpr. This drawing in space becomes a sculpture in the space of the gallery, which in turn becomes an extension of the medium.

Henriques’ residency at Location One is supported by Gulbenkian Foundation and Luso American Foundation for Development.

Agnieszka Kalinowska (Poland) Doormen
A film and photographic project realized by Agnieszka Kalinowska during her residency, the work features six doormen of different gender, age and faith who come together to narrate personal emotions and observations. Their conversation also touches on politics, ecology and women’s rights. Privy to the hidden worlds of elite Manhattanites, doormen are usually perceived as an invisible people from a different social class. By empowering them with speech, Kalinowska points to reevaluating one of New York’s more conventional practices. The slide presentation here at Location One constitutes a prologue to the film of the same title. Photographs of these “heroes” in their every day outfits alternate with portraits of their uniformed selves.

Kalinowska’s residency at Location One is supported by the Trust for Mutual Understanding and Ministry of Culture, Poland.

Nina Katchadourian (U.S.A.) Zoo (2001-ongoing; a work in progress)
For the past five years Katchadourian has been videotaping extensively in zoos around the world for this project, gathering footage of animals with the goal of rendering them somewhat unplaceable, thus working against the common goal of zoos to project animals as approachable, understandable, and ultimately “like us.” She is also

trying to work with the sound in a way that builds an aggregated audio environment, where sound from one monitor will sometimes match, invade, or even dominate, the image of another. The piece shown at Location One is a work-in-progress that reflects the first phase of the project developed during her residency.

Katchadourian’s residency at Location One is supported by The Andy Warhol Foundation for the Visual Arts.

Rie Kawakami (Japan) Untitled
Of her work Kawakami says that it lies “in revealing the expression of mystery in life and its cycles. I am interested in the unique and aesthetic phenomenon that can be drawn from the nature of materials, both in physical and theoretical terms. My artistic practice is based on the attempt to develop new forms of life in sculpture, installation and interactive work.”

Trained in the tradition of iron and steel welding, this is Rie’s first animation piece. Combining images of Japanese Sumi ink and the Fude brush, the work is modulated by expressions of rhythm and the passage of time. A sense of intense concentration permeates the work as one witnesses the tension between the brush and ink leading to the appearance of the Sumi drawing.

Kawakami’s residency at Location One is supported by the Agency for Cultural Affairs, Japan.

Alessandro Nassiri (Italy) My private demonstration (a project for 10-20 people, their minds and some T-shirts)
“A demonstration is the display of the common opinion of a group of people. The opinion is demonstrated to be significant by gathering a crowd associated with that opinion. Demonstrations can be used to show a viewpoint (either positive or negative) regarding an issue…” (from wikipedia.org)

For the art video project My Private Demonstration, the artist asked some people to create a small and quick demonstration, to decide on the issue and to take part in it. A sentence was chosen to represent the issue, then transferred onto white T-shirts in red letters (one letter for each T-shirt). Participants came together on December 16th, and went out on the streets to demonstrate: their t-shits read “coming soon.”

Nassiri’s residency at Location One is supported by Associazione Artegiovane, Fondi Anima, and Comune di Milano.

Kaori Tazoe (Japan)
This new work addresses Kaori’s long term interest in the investigation of the boundaries between reality and fiction and the pursuit of identifying what she calls a “special place,” where these boundaries meet. Surveillance cameras, works on paper and leathercrafted pieces are combined in an attempt to reach this place.

From 1995 to 2002, Kaori collaborated with artist/fashion designer Junko Ito in “Suit,” a series of conceptual art projects exploring the relationship between the individual and the collective mind, and the ways that the act of wearing a uniform affects both the individual and the group. In 2001, she co-founded Scratch Tile Art Space, one of the first alternative art spaces in Yokohama.

Tazoe’s residency at Location One is supported by the Asian Cultural Council.

Virginie Yassef (France) Les Eparpilles / The Scattered
Virginie’s multi-faceted body of work reveals the poetry of everyday life and emphasizes the subtle gap between perception and reality. Strangeness and the supernatural surfaces when one least expects it. This sculpture continues in the same vein and belongs to a new series of objects referred to by the artist as Les Eparpilles. According to Virginie, these objects have regular shapes, are made of metallic scales, weigh several tons, and are loaded with supraconductive magnets. In appearance they are small metallic spheres, or dirty snowballs whose diameters measure one kilometer. The piece presented at Location One is made in aluminum foil, is attached to its base by a magnet, and produces cold air.

Yassef’s residency at Location One is supported by CulturesFrance and Ville de Paris.