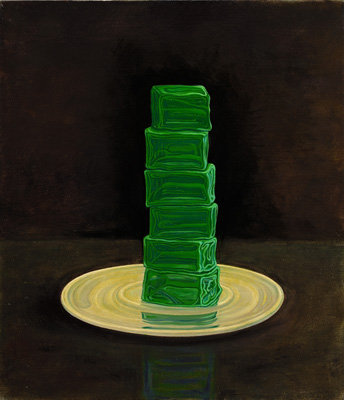 Eleven is pleased to present an exhibition of still life paintings by Kent Christensen which runs from 14 February to 17 March 2007.

The oil paintings of sweets, cakes and other sugar-based foods are a witty exploration of the cultural and personal associations of food, while also considering the broader subjects of art history, social satire and cultural politics.

Kent has a long-standing fascination in food and has been painting the subject exclusively for the last two years. Following in the tradition of still life food painting, his colourful works represent small tokens of common human experience and draw on the symbolic power of food as a facilitator of human intimacy. They conjure up the communal experience of shared meals while acting as a tangible image of the experience of tasting food – memories that are more often evoked through the senses of taste and smell.

The artist sees his subjects as works of art before he turns his attention to painting them, yet he strives to move beyond their appearance and to invest the sweets with personal meaning and history, while playing with traditional associations. Some works depict cheap American candy; others are of sophisticated French macaroons – a dichotomy that playfully mirrors the high-art versus low-art discussion.

Ultimately, the exhibition is an exploration and criticism of gluttony. The paintings refer to America’s rising obesity levels and cast a critical eye over a nation whose appetite for sugar is never sated. But more specifically they explore the artist’s faith as a Mormon and the practices of his culture.

Due to their strict adherence to the church’s prohibitions, Mormons abstain from vices such as smoking and drinking. In their place, they indulge in sugar – an indulgence so zealous that the artist humorously proposes that sugar is in fact ‘Mormon heroin’. Kent both celebrates and satirises this Mormon obsession with all things sweet. The sugary surfaces of the sweets and rich candy colours are mouth watering and alluring, yet also speak of a sickly over indulgence that brings with it feelings of guilt and gluttony.

Rather than painting the works as literal still lifes, Kent often uses the sweets as building blocks. Pieces of Jell-O, macaroons or ice cream sandwiches are stacked up on top of each other to create sculptural forms that remove the sweets from their original context. Some become like totemic symbols, a form that Kent is drawn to for its spiritual properties and energy. Others appear like recreations of other artists’ works: pieces of salt water taffy spiral round to recreate Robert Smithson's monumental earth work Spiral Jetty; a stack of Jell-o pieces are transformed in to Donald Judd-esque sculpture and interspersed macaroons mirror a Richard Long circle.

Kent has exhibited in group shows in New York and in both group and solo shows in Los Angeles, at the University of Utah in Salt Lake City and at the Sundance Screening Room Gallery. Kent was born in 1957 in Los Angeles and resides in Sundance, Utah and New York. This is his first solo exhibition in the UK.