Curated by Albrecht Bangert, and designed by Nigel Coates, the exhibition will offer an insight into the fantastical world of the designer, bringing together extraordinary large scale prototypes, including trucks, aircraft and cars. 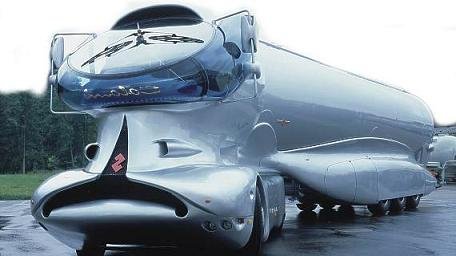 Luigi Colani is a great maverick of 20th Century design. In a career spanning almost six decades, he has placed organic design firmly on the contemporary agenda, producing biodynamic designs for cars, boats, planes, ceramics, consumer goods, as well as creating alternative futuristic concepts for the design of transport and architecture. A powerful influence on contemporary designers such as Ross Lovegrove and Future Systems, Colani emphasized the importance and evolutionary potential of design at an early date, often pre-empting major design trends by decades. The Design Museum will present the first UK retrospective of Colani’s work in Luigi Colani – Translating Nature from 3 March to 17 June 2007.

Born in Berlin in 1928, with an art school training supplemented by studies in aerodynamics, Colani began his career working in the car industry, producing a revolutionary all-plastic body for Simca in 1953. He treated his car designs as sculptures, not only creating spectacular biomorphic shapes, but also greatly enhancing vehicle performance through his passion for aerodynamics. In the 1960s he set up his own studio where he made a name as the king of the customizers, with his own baroque idiom of sculptural forms that spilled from cars to aircraft, and then into furniture and industrial objects. With the firm belief that nature had already solved many of the tasks of design, Colani’s work in the 1970s borrowed shapes from the natural world – sharks, rays and fish in particular – taking him beyond the mundane sober world of industrial design into pop fantasy. His clients included VW, ceramics maker Villeroy & Boch and china manufacturers Rosenthal. From 1981 he began to work in Japan, and his swooping curved forms transformed cameras for Canon, as well as headphones for Sony. Today Colani continues to produce streamlined trucks, cars, motorcycles and domestic objects in his studio workshop in Karlsruhe, Germany.

Curated by Albrecht Bangert, and designed by Nigel Coates, the Design Museum exhibition will offer an insight into the fantastical world of Luigi Colani, bringing together extraordinary large scale prototypes, including trucks, aircraft and cars.