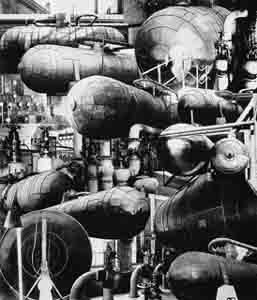 CESAR DOMELA
Cesar Domela (Amsterdam, 1900 – Paris, 1992) was one of the pioneering figures of the international avant-garde between the two World Wars. He began with abstract compositions that followed the neoplasticist principles of Mondrian and Van Doesburg, whom he met in 1924. He then distanced himself from that group and developed a personal idiom expressed in the “relief-paintings” for which he is still best known. This retrospective will take a close look at his experiments in the fields of photomontage and graphic design for advertising, which will be shown in their entirety for the first time.

Itinerant photographer Bernard Plossu imbues his photographs with the rhythm of his walking pace; by turns quick and bold when subjects jostle before his attentive lens, or slow and steady when witnessing an emotional or thoughtful scene. His are the pictures of a patient, affectionate, delighted and discrete observer. This retrospective at the Strasbourg Museum of Modern and Contemporary Art features around one hundred photographs, ranging from the early works from his beginnings as a photographer in 1958, to his latest work, made while “wandering” around the streets of Strasbourg, via India, Mexico, Niger, and many other places. An important selection of published works (Plossu has published around 60 monographs since 1972) as well as of documents, photographs and periodicals that shed additional light on the artist’s career will also be shown.

FRANK NITSCHE
Frank Nitsche, born in 1964 in Görlitz (former GDR), constructs his pictures from a hoard of magazine images, which he patiently classifies and assembles into a sort of grid. The futuristic abstract geometries of his work seem at first glance to be smooth and polished, but a closer examination reveals a number of dribbles, spots and thick smears of paint, residual vestiges of the painter’s touch. Lines, outlines and axes merge into complex perspectives that create a strange illusion of depth, where bold colours and pastel tones alternate. This exhibition will present the more recent works from an oeuvre that walks the tightrope between abstraction and figurativeness.

Communications Department of the Museums of Strasbourg Lize Bratt +33 3 88525015 lize.braat@cus-strasbourg.net