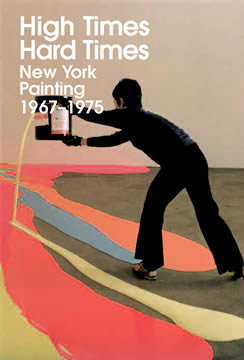 In the late 1960s and early 1970’s the New York art world was, famously, an exciting place to be. Recapturing the liveliness and urgency of this important, but critically overlooked moment, High Times, Hard Times: New York Painting 1967-1975 presents a wide view of experimental abstract painting in works by 38 diverse artists. The exhibition is accompanied by a 176-page, fully illustrated catalogue.

Distinguished painters David Diao, Guy Goodwin, Mary Heilmann and Dorothea Rockburne discuss painting in New York City during the late 1960s to the mid-1970s. Artist Deborah Kass joins the group with a perspective on how the legacy of that moment shapes painting today.

This panel discussion is co-organized by the National Academy Museum and iCI.

A panel discussion on issues of politics, race, and feminism in the art world as they emerged during the mid-‘60s. The panel will look at the repercussions today of that historical moment of exuberance forty years ago, when painting escaped the confines of a prescriptive modernism.
Panel discussion is organized by the Vera List Center for Art and Politics, iCI, and the National Academy Museum.

High Times, Hard Times: New York Painting 1967-1975 is a traveling exhibition organized and circulated by Independent Curators International (iCI). The guest curator is Katy Siegel, with David Reed as advisor. The exhibition, tour, and catalogue are made possible, in part, with support from the Peter Norton Family Foundation, the Harriett Ames Charitable Trust, the Milton and Sally Avery Arts Foundation, the Dedalus Foundation, Inc., the iCI International Associates, the iCI Exhibition Partners, Kenneth S. Kuchin, and Gerrit and Sydie Lansing.