The first exhibition at the gallery by seminal California installation artist. The exhibition will also take place in the old location at number 564, with an installation of The Bedroom, a new eight-panel wall painting, as well as drawings ranging over 20 years of career. 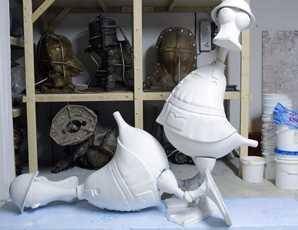 New York, NY, January 15, 2007 — Yvon Lambert New York is pleased to announce the first exhibition at the gallery by seminal California installation artist Richard Jackson. The exhibition of new works – the first for Yvon Lambert in its new, expanded location at 550 West 21st Street – will primarily feature two major installations, The Delivery Room and the monumental The War Room (both 2007), as well as a large Dymaxion–head digital print. The exhibition will also take place in Yvon Lambert’s 564 West 25th Street location – the last in this location – with an installation of The Bedroom (1976-1982, re-created in 2002), a new eight-panel wall painting, as well as drawings ranging over 20 years of Jackson’s career. A catalogue marking the first collaboration between the artist and Yvon Lambert will also accompany the exhibition, with an essay by Robert Hobbs.
The exhibition will be on view from February 24 through March 22, 2007, and is open Tuesday through Saturday from 10AM-6PM.

An admitted art anarchist, for over forty years Jackson has been exploring and challenging the conceptual and physical boundaries of painting and the artist – and making a mess of galleries and museums in the process. Assaulting viewers with humor and vulgarity that belies the underlying rhetoric and intellectual rigor of the work, Jackson’s work belongs to – and perhaps even defines – the distinct tradition of art about art. Straddling the line between performance and installation, Jackson’s preposterous painting machines are relics of a brief performance action, meditating on the labor itself of making art as well as on art’s continuing ability to reflect contemporary society.

Born in Sacramento, California in 1939, Jackson had his fist solo show in Sacramento in 1961, then in Los Angeles in 1968. His first solo project for a museum came in 1974 at the Los Angeles County Museum of Art. Since then, his work has been shown and collected by institutions such as the Museum of Contemporary Art in Los Angeles, the San Francisco Museum of Modern Art, the Menil Collection and the Contemporary Arts Museum in Houston, the Museum of Contemporary Art in Chicago, the Museum of Modern Art and the Whitney Museum in New York, the Centre Georges Pompidou and Musée d’Art Moderne de la Ville de Paris, and, most recently, in a group show at the Staatliche Kunsthalle in Baden Baden, and a solo show at the Hamburger Bahnhof (works from the Flick Collection) in Berlin. However, it wasn’t until his appearances at the 1997 Biennale d’Art Contemporain de Lyon and the 1999 Venice Biennale that he was launched to international prominence. Jackson currently lives and works in Sierra Madre, California.