Bearding The Lion In His Den. The show presents a re-creation of his November 1977 installation at the Kitchen. The work is structured around the kind of unexpected but evocative juxtapositions of objects, words, sounds, and images that inform his paintings and his artistic vision. 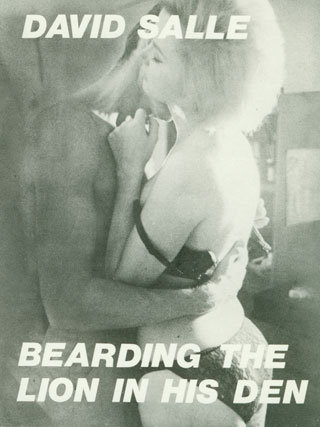 Bearding The Lion In His Den

Bearding The Lion In His Den, a re-creation of David Salle’s November 1977 installation at the Kitchen, will be presented by Deitch Projects from March 3 – 24. Some of the most important innovations in the painting, sculpture and photography associated with the 1980s came out of the art performance and performative installations of the 1970s. David Salle was one of the first artists to apply the conceptual performance of the 1970s to painting. Performance continues to be an important element in Salle’s approach to his work. Revisiting his installation work of the 1970s gives us an insight into how Salle developed his interest in conceptual film and performance into a new vision of painting. Salle’s painting is characterized by a poetic juxtaposition of images that evoke memories and emotions. His 1977 installation is structured around the kind of unexpected but evocative juxtapositions of objects, words, sounds, and images that inform his paintings and his artistic vision.

The Kitchen was a vital center for the new art and performance in the 1970s. It was just as important for the artists of Salle’s generation as the major SoHo galleries. The artist Robert Longo was the Kitchen curator who had invited Salle to present his installation. It is amusing to see Eric Bogosian listed as the press contact on the attached copy of the original press release from The Kitchen. Deitch Projects presented David Salle’s 85 foot mural painting Songs for Sale, from 1997, last September. The re-creation of Bearding The Lion In His Den is part of an ongoing program to exhibit major works and projects from Salle’s career, from the mid 1970s to the present.