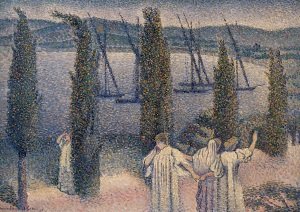 With Divisionism/Neo-Impressionism: Arcadia and Anarchy, the museum located on Unter den Linden is again the venue of an art-historical premiere: An exhibition focusing on Italian Divisionism will be on view for the very first time in Germany. This movement has frequently been regarded as a derivation of French Neo-Impressionism, yet the 36 loans from international museums and private collections displayed here reveal the often ignored formal and thematic differences between these artistic movements.

The Italian Divisionists—so called for the painting technique they employed, namely the division of color via individualized brushstrokes—were active in Italy during the 1890s and early 1900s. These painters remained grounded in academic traditions culled from Italy’s rich visual heritage, yet they took cues from the modernist practices happening elsewhere in Europe—primarily those of the French Neo-Impressionists, or Pointillists—and drew on chromatics and optics to develop an idiom that was all their own. Divisionism/Neo-Impressionism: Arcadia and Anarchy has a subtitle that literally and metaphorically alludes to philosophies shared by many Divisionist and Neo-Impressionist artists. Their choice of a radical new style was as anarchic as their allegiance to leftist politics, but their search for the ideal led to arcadian evocations in idyllic landscapes and mystical imagery.

The theories the Italians adopted were first espoused in the early 1880s by the Neo-Impressionists in France, beginning with Georges Seurat. Among the other artists soon practicing this mode of painting were the Frenchmen Charles Angrand, Henri-Edmond Cross, Albert Dubois-Pillet, Maximilien Luce, Camille Pissarro, and Paul Signac, the Belgian Théo Van Rysselberghe, and the Dutchman Jan Toorop. In 1886, Neo-Impressionism garnered international notice with the works shown in Paris at the eighth Impressionist exhibition, most notably Seurat’s epic A Sunday on La Grande Jatte (1884–86).

At the time of Divisionism’s inception, Italian artists had seen little or no Neo-Impressionist work firsthand and instead learned about that movement largely through French and Belgian journals such as L’Art moderne. These featured reviews by the noted anarchist art critic Félix Fénéon, who coined the term “Neo-Impressionism.” By 1887, the critic, gallerist, and painter Grubicy, who was largely responsible for disseminating Divisionism in Italy, drew on these published accounts in his own writings, especially in articles he penned for the Roman newspaper La Riforma.

Divisionism/Neo-Impressionism is the first exhibition to situate the Italian Divisionists within an international context alongside the major proponents of Neo-Impressionism. It is organized in five thematic groupings— Light, Landscape, Rural Life, Social Problems, and Symbolism —to address the concerns these artists shared as well as to showcase important instances of divergence in their work. The first section, Light, demonstrates the preoccupation with depicting the refracting effects of lamplight upon color in interiors. Similar interests, as applied to outdoor scenes, are evident in Landscape, which is comprised of works capitalizing upon the effects of sunlight, particularly in the reflective surfaces of rivers, lakes, glaciers, and the sea. Rural Life denotes the pervasive representations of agrarian labor and the sometimes idealized depictions of the peasantry in aesthetically beautiful images that seemingly contradict the hardships implicit within these scenes. In contrast, the paintings in Social Problems more directly call attention to the political issues of the day by portraying strikes, industrial labor, and the urban malaise of the working classes. Finally, Symbolism reveals the direction taken in the late 1890s, primarily by the Italian Divisionists, when artists turned away from political matters to realize transcendent allegorical or spiritual visions.

While the Divisionists worked within similar formal and ideological frameworks as their European counterparts, the influence of Italian art—from the old masters to more recent exponents of naturalism—is manifest in their bucolic scenes, emphasis on modeled form and movement, and consistently large-scale canvases, as well as the reformulation of Christian iconography, particularly in their Symbolist images. Indicating the paradoxical nature of Italian art in this period, these pursuits, in combination with a modern, revolutionary technique, both reflected the Divisionists’ anchoring in Italy’s artistic legacy and pointed the way for the next generation, the Futurists.

Divisionism/Neo-Impressionism: Arcadia and Anarchy was curated by Dr. Vivien Greene, Associate Curator, Guggenheim Museum, New York. A German and an English language catalog have been published on the occasion of the exhibition, with essays by Vivien Greene, Giovanna Ginex, Aurora Scotti Tosini and Dominique Lobstein, and can be purchased at the price of 35 euros. As Edition No. 38, Deutsche Guggenheim has created the Tavola Floreale. The elegant ensemble for a table setting was designed by an anonymous artist around 1895. The reproduction is available in a limited edition of 100 settings for 120 euros.

An extensive supporting program of lectures and children’s programs will augment the exhibition. Guided tours are offered free of charge each day at 6 p.m. The well-known Lunch Lectures on Wednesdays at 1 p.m., as well as the Keynote Tours each Sunday at 11:30 a.m., round out the offerings of the supporting program.