"The Modern West - American Landscapes, 1890-1950" explores the development of modernism in the United States with the works of some of the most influential artists of the last century. On show one hundred paintings, watercolors, and photographs. "Alternative Perspective of the West Unveiled" includes approximately 30 photograps and continues the dialogue about the place we call the West. 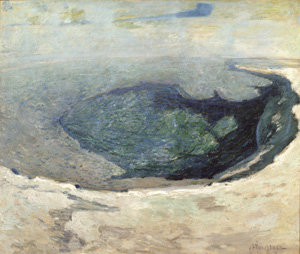 The Los Angeles County Museum of Art (LACMA) offers a fresh assessment of American modernism in The Modern West: American Landscapes, 1890–1950, on view from March 4 to June 3, 2007. In the first major exhibition to explore the role of the American West in the development of modernism in the United States—a movement traditionally associated with the East Coast—the works of some of the most influential artists of the last century and a half will be highlighted. Together, pieces from Georgia O’Keeffe, Ansel Adams, Jackson Pollock, and others challenge the notion that the art of the West is unrelated to modernism in the U.S. and demonstrate that the vast, rugged land of the West, in fact, left an indelible mark on modernism. Organized by the Museum of Fine Arts, Houston, The Modern West features approximately one hundred paintings, watercolors, and photographs that collectively redefine commonly held perceptions of modernism as well as western art.

“The Modern West offers an extraordinary opportunity to see the American West anew—through the eyes of some of the most important modern artists working in America in the early twentieth century, many not traditionally associated with the West,” noted Austen Bailly, Assistant Curator of American Art. “The impact of the western landscape on American modernism has long been underestimated and this exhibition makes the connections stunningly visible.”

Evening Star No. II (1917) a watercolor by Georgia O’Keeffe, is among the artist’s earliest, most intense visual responses to the western landscape, specifically to the prairie of the Texas panhandle. From 1916 to1918, O’Keeffe lived in Canyon, Texas while she headed the art department at West Texas State Normal College (now called West Texas A&M University). In west Texas, O’Keeffe established her aesthetic goals: she began to use bold color as an expressive vehicle and to understand the landscape in modern terms as a place of freedom, power, and seemingly infinite space and time. These watercolors suggest the kind of intuitive response to the western land and sky, at once representational and abstract, that O’Keeffe cultivated in her art.

Though Jackson Pollock is commonly associated with modernists working in New York, he was born in Wyoming and raised in California and Arizona. Night Mist (1945) reveals his attraction to symbols of ancient cultures and Native American art, and also showcases the iconography he generated on his own. Symbols of a primordial spirit world—fragmented images of humans, birds, eyes, and faces—lurk beneath a web of white paint. Pollock was profoundly interested in the psychological and physical characteristics of the western landscape and in the cultural references he placed on it. His efforts to express his personal experience of the West led him to paint in radically new ways and to become a pioneer of abstract expressionism.

Photographs, a key medium in modern American art, account for half of the works in the exhibition. In Tractored Out, Childress County, Texas (1938), Dorothea Lange documented the changing relationship between Americans and the land in a formal manner that reveals her interest in modern aesthetics. The subject of the photograph is twofold—the geometry, form, composition, and divisions of space that the modern landscape offered an artist and imposed on its inhabitants, as well as the farmers who had been “tractored out.” The absence of workers in this picture signals the human costs of mechanized farming and also enables the artful vision Lange constructs of the empty farmland.

Edward Weston also explores western American modernism through the lens of the camera. Oil on Rocks, Point Lobos (1942) depicts an area three miles south of Carmel, California, where Weston settled in 1929 and established his portrait practice. In the photograph, Weston is not merely capturing a formal, modernist pattern he perceived in the oil on the rocks; he also aims to portray a collision between ancient geology and modern life. The environmental degradation of the spilled oil does not, however, obscure the rock textures and markings formed by weather and water over millions of years. The marks and splashes present in Weston’s photograph instead represent the layered history of land and life in the West that interested many modern artists.

Rather than offering an exhaustive survey, The Modern West: American Landscapes, 1890–1950 highlights the various groups and artists who played integral roles in shaping visions of specific regions and how they pursued related issues of modernity and concepts of national character that were relevant at this time. For these artists, the West provided a “new” environment—a new nature and the people who inhabited it—for constructing American art on thoroughly modern ground.

Credit: This exhibition was organized by the Museum of Fine Arts, Houston. Generous funding was provided by the National Endowment for the Humanities and the National Endowment for the Arts. Additional support was provided by the Stark Foundation; the Hamill Foundation; Mr. Frank Hevrdejs; Mr. and Mrs. Peter R. Coneway; Wells Fargo; Fulbright & Jaworski; Jeff Fort and Marion Barthelme; Mr. and Mrs. Robert L. Clarke; Mr. John R. Eckel, Jr.; Linn, Thurber, Arnold & Skrabanek; Lisa and Will Mathis; and Carla Knobloch. The catalogue for this exhibition received support from Palm Beach! America’s International Fine Art & Antique Fair. In-kind support for the Los Angeles presentation was made possible by official hotel sponsor Millennium Biltmore as part of the Millennium on View program.

The Los Angeles County Museum of Art (LACMA) presents Re-SITE-ing the West: Contemporary Photographs from the Permanent Collection, an installation on view in conjunction with The Modern West: American Landscapes, 1890–1950. The exhibition, which includes approximately thirty works by artists such as Lewis Baltz, Hank Wessel, and Mark Ruwedel, continues the dialogue about—and affirms the enduring mystique of—the place we call the West. By the 1970s, when most of the photographs on view were made, America’s postwar optimism had faded. Anxiety about potential nuclear annihilation grew as the cold war raged. With its weapons laboratories and test sites, the West was implicated in this new chapter of human history. Ravenous consumption sparked by American affluence further transformed the mythical guise of the Western landscape. Artists soon began to investigate our contradictory appetites for creation and destruction. Reflecting on the realities of rapid development and exploring the terrain as object, the artists in this exhibition celebrate the West as a site in and of itself, with imposed illusions, allusions, and romantic pretensions laid to rest.

In April 2006, Michael Govan became CEO and Wallis Annenberg Director of the Los Angeles County Museum of Art (LACMA). He is the seventh person to hold the position of Director in the museum’s 41-year history. Established as an independent institution in 1965, the Los Angeles County Museum of Art has assembled a permanent collection that includes approximately 100,000 works of art spanning the history of art from ancient times to the present, making it the premier encyclopedic visual arts museum in the western United States. Located in the heart of one of the most culturally diverse cities in the world, the museum uses its collection and resources to provide a variety of educational and cultural experiences for the people who live in, work in, and visit Los Angeles. LACMA offers an outstanding schedule of special exhibitions, as well as lectures, classes, family activities, film programs, and world-class musical events. The museum offers free admission after 5 pm every day th e museum is open and all day on the second Tuesday of each month. LACMA's “Free after Five” program is sponsored by Target.