Image-Breaking, Image-Making. From Julie Mehretu's intricately layered paintings, n which she uses cartoon explosions to portray the changing histories of civilizations as a result of warfare, to Arturo Herrera's psychological collages, made by slicing and reconfiguring the pages of Walt Disney coloring books, and from Ellen Gallagher's seductively Minimalist paintings permeated by blackface signs culled from minstrel performances, to Rivane Neuenschwander's wiped-out cartoon characters. 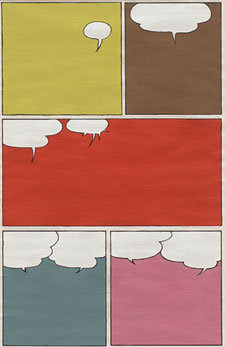 Comic Abstraction: Image-Breaking, Image-Making brings together thirteen contemporary artists whose works offer a rich account of the interplay between abstraction and comic models of representation. While many exhibitions have explored the impact of mass culture on contemporary art, they have generally focused on figuration and easily identifiable pop characters and themes. This exhibition approaches the topic from a different angle. It looks at the ways artists—particularly those working in the last fifteen years—have used images culled from slapstick, comic strips, film, caricature, cartoons, and animation as springboards for abstraction, not to withdraw from reality, but to address perplexing questions about war and global conflicts, the loss of innocence, and racial stereotyping.

What does it mean to confront political concerns with humor? How can comics serve as a medium for tackling difficult issues? From Julie Mehretu’s intricately layered paintings of cartoon explosions portraying warfare and Arturo Herrera’s psychological collages of children’s coloring books, to Ellen Gallagher’s seductively minimalist paintings permeated by “blackface” signs evocative of minstrel performances and Rivane Neuenschwander’s overpainted comic strips, the works presented here grapple with such questions. The act of abstracting a comic image entails blurring, erasing, and “unpainting” figuration in ways that raise the stakes attached to recognition. Bridging the rift between abstraction and comics in ways that are at once critical and playful, this exhibition underscores the way popular imagery, which is so deeply imprinted on our collective consciousness, carries an extreme visual potency even when entirely abstracted.