Europe and German Painting in the 19th Century. The focal point of the exhibition is the different parts of Europe and their cultural and artistic characteristics. It starts with Greece, the country that provided modern Europe's structure and cultural roots, with works by artists such as Karl Friedrich Schinkel and Leo von Klenze. Going on with masterpieces from Italy, France, Belgium, Spain, Germany... 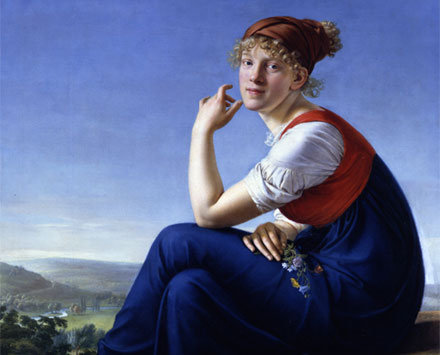 Europe and German Painting in the 19th Century

The central theme of this exhibition is how German artists of the XIXth century saw their European neighbors. It gathers 150 masterpieces, mostly borrowed from the collections of the State museums of Berlin, Dresden and Munich and is completed by loans from some twenty other German museums. This is the first time these three major institutions organize together an exhibition of this scale, covering all the spectrum of German painting of that era.

The Germans and Europe
How did the Germans see Europe in the XIXth century, from Goethe up to Rilke? What did they see, what did they not see? The aim here is not to present the history of Germany - its wars, its potentates and its revolutions -, but rather to bring forth the polysemy and the artistic skill of German painting. The Staatlichen Museen of Berlin, the Staatlichen Kunstsammlungen Dresden and the Bayerischen Staatsgemäldesammlungen München have combined their efforts to explore German art of the XIXth century from different angles. Each European country and region is looked at from a specific artistic theme. German art is deeply influenced by European art, history and events. It is precisely those influences and multiple interactions the exhibition focuses on.

German history is the history of its neighbors.
German history is the history of its neighbors and its exchanges with them. The political, spiritual and artistic interactions vary in intensity and quality. One just needs to look to the South -Greece and Italy, the roots of their common European culture- or towards the French, Dutch and Austrian neighbors to find the traces of so many inspirations. But as of the end of the XVIIIth century Germany stroke up cultural exchanges with many other countries. The exhibition also underlines, in keeping with the European Union, the links between the nations, the countries and the regions. The history of Germany is presented like the history of small States, that above all makeup cultural entities enriched by their exchanges.

A journey through Europe
The exhibition presents Europe in twelve phases. The journey begins in Greece, the crib of European culture, and of which Karl Friedrich Schinkel and Anselm Feuerbach idealized the antique settings and myths. Joseph Anton Koch, Friedrich Overbeck and Carl Blechen turned to Italy while the Academy of Copenhaguen inspired Philipp Otto Runge, Johan Christian Dahl and Caspar David Friedrich. The Swiss and Austrian Alps irresistibly attracted Friedrich and Ludwig Richter, whose landscapes have gone through to posterity. Portrait painting was inherited from Bohemia, Spain and England. Belgium left its own print on historical painting. Max Liebermann sublimated the Dutch scenes into a social utopia, while Carl Spitzweg and Wilhelm Leibl turned towards French outdoor painting. The journey ends in Berlin with one of its most penetrating observers, Adolph Menzel.

CENTRE FOR FINE ARTS BRUSSELS Rue Ravenstein 23, 1000 Bruxelles
OPENING HOURS: Tuesday-Sunday from 10am to 6pm, Thursday from 10am to 9pm
Monday only on reservation for groups of 150 persons and more
PRICES OF ADMISSION: Full price 9€