An investigation into what drove the early explorers in their search for unknown lands, the exhibition looks at the expedition as an embodiment of quest and introspection. For those who undertake such voyages, the destination is a projection area on which earlier accounts mingle with legend and potential narratives. 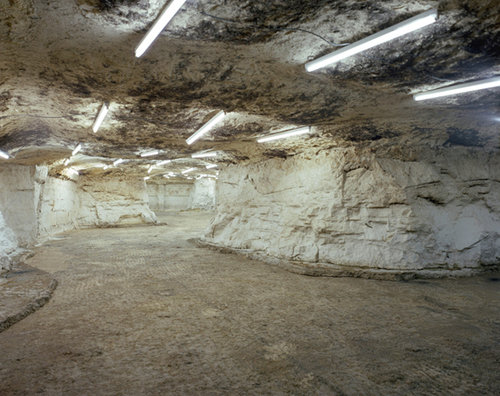 After "Makings of the Sublime" (2005) and "Cosmogonies" (2006), the group exhibition "Expeditions" marks a further stage in programming at La Galerie. An investigation into what drove the early explorers in their search for unknown lands, the exhibition looks at the expedition as an embodiment of quest and introspection. For those who undertake such voyages, the destination is a projection area on which earlier accounts mingle with legend and potential narratives. Despite its powerful historical charge, the place to be explored remains a zone of uncertainty, presenting as an imprecisely outlined target, an area of shadow, a territory on the borders of abstraction. Supposed to resolve this enigma, the expedition is often delayed by various detours and debacles and may tend to lose sight of its initial goal, gradually making way for an inner quest. However organised and scientific the expedition, it is this potential for wanderings that constitutes the exhibition's point of departure.

But rather than the expedition in the strict sense, the interconnection between the different works is in fact the relationship between men and some domain of the unfathomable. Joachim Koester's slide show uses a vast icescape in Greenland to illustrate the description left by explorer Adolf Erik Nordenskiöld in his diary of 1870. The response to the absolute loss of bearings produced by this pristine topography is an almost vain attempt to get some kind of grip on its reality. In the sculpture, photograph and drawing making up Daniel Roth's installation, a cave is the entrance to an invisible world, a telluric excavation whose depths signal the beginnings of a subterranean civilisation. In the same way exploration, for Simon Boudvin, comes in the form of photographs taken blind of disused quarries, negative architectural shapes that morph into invested spaces.

In this exhibition, the artists invent other kinds of expeditions out of a thoroughly tangible everyday reality. Choosing sites which a priori are less disorientating than "extreme environments", they use the experience of situational shifts or reversals to lay bare an unknown dimension lying somewhere beyond appearances. In another of Simon Boudvin's installations the loss of bearings is accentuated by literally standing the space on its head. Hans Schabus, in his video Passagier, transposes a train trip into his workplace, bringing an atmosphere of mystery into a studio that becomes a locus for infinite possibilities. Illustrated by a selection of videos and objects, Laurent Tixador and Abraham Poincheval's approach focuses on settings seemingly bare of all exoticism, and rediscovers in them things we thought we already knew.

In all these cases the expedition comes across as less an adventure than an endeavour, with all the potential for failure this implies. In a number of works the expedition takes the form of an initiatory voyage, a following in the footsteps of others, be they explorers – Nordenskjöld for Koester – or artists, with the intention of reliving a historical experience. Tacita Dean's work is a sound-transcription of her journey to Utah in search of – thirty years after its construction – Robert Smithson's Spiral Jetty, an inherently shifting creation perpetually on the cusp between appearance and disappearance. In its quest for a work itself founded on a quest, this soundtrack is a sharing of the way the two protagonists, despite the exactness of their instructions, temporise about homing in on their target. Following a similar path, Dove Allouche visits Estonia twenty-seven years after the making of Tarkovski's Stalker, to capture in photographs the all but unchanged locations of "The Zone".

Like "The Zone", the expedition's locus as addressed by the exhibition is an elusive space-time. And while this is an imaginary sphere in which, of course, all projections are allowed, its existence may also be the result of a voluntary deferral. In a mural drawing by Mathieu Kleyebe Abonnenc, reminiscent of a panorama of colonial inspiration, are blank areas, shadow zones that fall somewhere between the incomplete and the erased and challenge the notion of the pristine. Far removed from the exoticism generally associated with the concept, Paysage de traite 03 is a reminder that the expedition also implies a degree of oblivion.