The Plains of Sweet Regret. A five channel video installation that during its eighteen minutes takes the viewer through the vast expanses of the landscape, into the towns and farmsteads both occupied and abandoned, and offers a perspective on the lives of the resilient people who continue to live there. 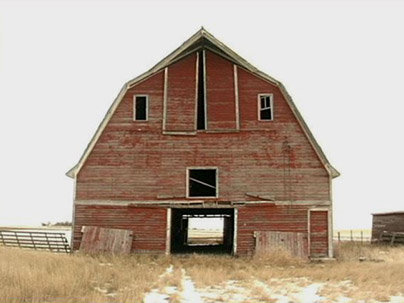 The Plains of Sweet Regret

Mary Lucier was invited by the North Dakota Museum of Art to participate in the series of projects commissioned by the museum to address the subject of the emptying out of the northern plains. The resulting work, The Plains of Sweet Regret, is a five channel video installation that during its eighteen minutes takes the viewer through the vast expanses of the landscape, into the towns and farmsteads both occupied and abandoned, and offers a perspective on the lives of the resilient people who continue to live there.

The work begins with texts - phrases provided by residents, such as "lots of space, few people, tough climate, big farms, small towns, good hearts," and "the land represents both substance and idea, the center and the circumference." The screens fill with images of empty roads that mark the corrugated topography of the land as it rises and falls like the swells of the ocean and extend to a distant horizon. “You can see weather and the neighbors coming for miles."

Accompanied by a resonant electronic soundtrack composed by her long-time collaborator Earl Howard, the work establishes a melancholy yet unsentimental tone as Lucier’s camera brings us to the intimate ruins of uninhabited places. She records the birth of a calf as counterpoint to the wind blowing through empty barns; actors readying themselves backstage against her examination of inscrutable relics left behind by people long departed. The natural gas well viewed through a fiery haze and the massive grain elevators suggest the mechanization and scale of corporate agribusiness; an encounter between a man on horseback and a rancher in a pickup truck epitomizes both the actuality and the mythic representations of rural life.

The Plains of Sweet Regret approaches its conclusion with a rodeo sequence in which a rider becomes dangerously entangled with a bull. It is seen in slow motion and for the rest of the rodeo sequence Lucier overlays the footage with the same image in reverse, creating a mirror view in which the movement emerges and disappears from a central slice. While distinct enough to perceive the events, the layered image is transformed into a semi-abstraction of rodeo and suggests associations with other ritualistic performances. The rodeo is paired with a plaintive country western song, George Strait’s I Can Still Make Cheyenne, that Lucier also layers over itself to achieve a density similar to the rodeo images. The song’s poignant narrative about an itinerant rodeo man and the woman he leaves behind ends as the video fades on a handsome young cowboy who with a pump of his fist affirms his satisfaction with his performance in the arena.

The exhibition is accompanied by a catalogue with a preface by Laurel Reuter, director of the North Dakota Museum of Art and an essay by art historian and critic Karen Wilkin. Mary Lucier received grants from Creative Capital and the Rockefeller Foundation in support of The Plains of Sweet Regret. The North Dakota Museum of Art received funding from the National Endowment for the Arts. The Nathan Cummings Foundation and Archer Daniels Midland provided support for the catalogue.

The Plains of Sweet Regret has been exhibited at the North Dakota Museum of Art in Grand Forks, the University of Wyoming Art Museum and the University of Michigan Museum of Art. This is Mary Lucier’s first large-scale installation exhibited in New York since 2001, when an important early work was included in Into the Light: The Projected Image in American Art 1964-1977 at the Whitney Museum of American Art, curated by Chrissie Isles. Another seminal piece, Untitled Display System, was recently acquired by the Museum Nacional Centro de Arte Reina Sofia in Madrid, and is currently on view there in First Generation: Art and the Moving Image, 1963-1986, curated by Berta Sichel. Mary Lucier is presently working on a multiple-channel high-definition video series in conjunction with Rainbow Media and the Milwaukee Art Museum. She will receive the 2007 Skowhegan Medal for Video at the Skowhegan Awards dinner on April 24.