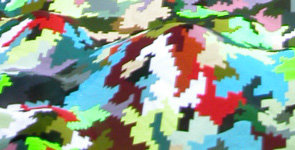 Over the nearly 60 years since the founding of the State of Israel, people outside the country, informed mainly by media accounts, see it primarily as a place of conflict. What does this mean for art about Israel?

Dateline Israel: New Photography and Video Art, on view at The Jewish Museum from March 10 through August 5, 2007, focuses on photography and video art made after the year 2000. Expressing the diverse outlooks of nearly two dozen artists, these images represent the life and culture of a nation where political realities influence every aspect of creative endeavor. What is revealed is a complicated view of Israel and its people.

Photographers and video artists were among the first to react to events such as the second Intifada, a wave of violence and political conflict which began in 2000 between Israel and the Palestinians. Their art became an effective medium for mining the day to day life in Israel. The exhibition at The Jewish Museum is comprised of 48 works by 23 artists who view Israel as a society that has outgrown the utopian model of its settlement and statehood. Dateline Israel: New Photography and Video Art presents evocative landscapes and powerful reportage, formal portraits, quickly composed snapshots, and video.

Artists represented include Boaz Arad, Yael Bartana, Rina Castelnuovo, Rineke Dijkstra, Barry Frydlender, Ori Gersht, Amit Goren, Michal Heiman, Noel Jabbour, Miki Kratsman, Leora Laor, Gillian Laub, Yaron Leshem, Motti Mizrachi, Orit Raff, Guy Raz, Igael Shemtov, Wolfgang Tillmans, Mark Wallinger, Wim Wenders, Pavel Wolberg, Sharon Ya’ari, and Catherine Yass. Sixteen of the participating artists are Israeli and seven are from other parts of the world. This reflects the growing emergence of Israel as a subject of widening interest among artists. Contested land, religious ideology, and the rights and needs of Israelis and Palestinians are concerns that these artists negotiate as they seek to portray a nation often divided against itself. The exhibition reveals a country in flux that only a multiplicity of perspectives can bring into focus. While Dateline Israel may reinforce the impression of a place where conflict can overwhelm daily life, the photographs and videos in this exhibition also offer a richer and more nuanced view.

National identity and geographical conflict are explored in the work of Amit Goren, Miki Kratsman, Boaz Arad, and Yaron Leshem, each offering a singular perspective on the Israeli political system. The photographic work of Michal Heiman confronts the realities of terrorist violence. Layers of meaning in the land itself – its sacred sites and contested zones – are embedded in the landscape photography of Wim Wenders, Sharon Ya’ari, and Ori Gersht, each exploring the ways in which human intervention has altered the terrain. While Wolfgang Tillmans provides a new vision of the dense urban cityscape of Tel Aviv, Mark Wallinger seeks to illuminate centuries of complex history that impact venerated sites in Jerusalem. The security barrier between Israel and the Palestinian Authority is featured in photographs and video art by Noel Jabbour and Catherine Yass, who link the artistic act to political awareness. The Israeli-Palestinian conflict is a subject for Pavel Wolberg, Rina Castelnuovo, and Miki Kratsman, whose photographs convey moments of paradox and social tension in the lives of Israelis and Palestinians. Portraits by Rineke Dijkstra and Gillian Laub bring a human perspective to individuals caught up in long-term political strife.

Dateline Israel: New Photography and Video Art is made possible by a leadership grant from the Andrea & Charles Bronfman Philanthropies and through endowed funds from the Melva Bucksbaum Fund for Contemporary Art. Additional support was provided by the Alfred J. Grunebaum Memorial Fund and Israel National Lottery Council for the Arts. Transportation assistance was provided by EL AL Israel Airlines. Special thanks to the Department of Cultural Affairs, Consulate General of Israel in New York.

The Jewish Museum will present Landslide from March 10 to August 5, 2007 in the Museum's Barbara and E. Robert Goodkind Media Center. Landslide (2004) is a colorful real-time animation of a shape-shifting map projected on a sandbox. The Israeli-born artist Shirley Shor uses Landslide as a metaphor for territorial conflicts in the Middle East and beyond. Combining custom software, video projection, and a sculptural element, Landslide is a new media installation that addresses geography, contested borders, and political power. Beginning each sequence with a palette of sixteen colors and thousands of color cells, the map gradually transforms as blinking color cells on a square grid "conquer" neighboring areas. When two colors ultimately dominate the grid, the program suspends and resumes. Landslide operates on an infinite loop in which each cycle produces a different map and a different visual experience.

Shor, who was born in Israel, is conscious of how quickly and easily borders change. Landslide refers specifically to the Palestinian-Israeli conflict but it is also serves as a universal metaphor for conflicts worldwide. The sandbox references the Middle Eastern landscape and the idea that children learn the rules of war early in the playground. Shor states, "For me, space (or "to make a place") is a political act. To draw a line is to divide; to include and to exclude. In my recent work I'm shifting from the idea of line as a limit, and from the act of transgression to the idea of liquid architecture that consists of lines in motion." Shirley Shor (b. 1971) is part of an emerging generation of new-media artists who are redefining how computers can be utilized as vehicles for artistic production. Her work has been exhibited at Yerba Buena Center for the Arts (San Francisco), Berkeley Art Museum, Ars Electronica (Linz), and Herzliya Museum of Art (Israel). She is represented in New York by Moti Hasson Gallery.

Landslide is presented in conjunction with the exhibition Dateline Israel: New Photography and Video Art. Located on the third floor of The Jewish Museum, the Goodkind Media Center houses a digital library of radio and television programs from the Museum's National Jewish Archive of Broadcasting (NJAB). It also features a changing exhibition space dedicated to video and new media. Using computer workstations, visitors are able to search material by keyword and by categories such as art, comedy, drama, news, music, kids, Israel, and the Holocaust.

About the National Jewish Archive of Broadcasting The National Jewish Archive of Broadcasting, founded in 1981 in association with the Charles H. Revson Foundation, is the largest and most comprehensive body of broadcast materials on 20th century Jewish culture in the United States. With a mission to collect, preserve and exhibit television and radio programs related to the Jewish experience, the NJAB is an important educational resource for critical examination of how Jews have been portrayed and portray themselves, and how the mass media has addressed issues of ethnicity and diversity. Its collection is comprised of 4,300 broadcast and cable television and radio programs.

About The Jewish Museum
The Jewish Museum was established on January 20, 1904 when Judge Mayer Sulzberger donated 26 ceremonial art objects to The Jewish Theological Seminary of America as the core of a museum collection. Today, The Jewish Museum maintains an important collection of 25,000 objects - paintings, sculpture, works on paper, photographs, archaeological artifacts, ceremonial objects, and broadcast media. Widely admired for its exhibitions and educational programs that inspire people of all backgrounds, The Jewish Museum is the preeminent United States institution exploring the intersection of 4,000 years of art and Jewish culture.

The Jewish Museum
1109 Fifth Avenue at 92nd Street - New York
Museum hours are Saturday through Wednesday, 11am to 5:45pm; and Thursday, 11am to 8pm.
Admission is $12 for adults, $10 for senior citizens, $7.50 for students, free for children under 12 and Jewish Museum members. Admission is free on Saturdays.