Inside Israel (Part 2). This show explores the country's land usages and features several of the most intriguing photographers working in Israel today. Represented are 22 works by 14 artists ranging from established, internationally exhibited photographers to several artists showing in New York for the first time. 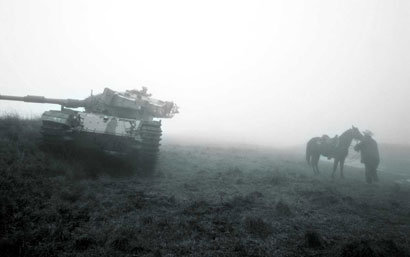 The Andrea Meislin Gallery is pleased to announce Current Visions: Inside Israel (Part 2), celebrating the gallery's third anniversary and revisiting the theme of our inaugural 2004 exhibition. This show explores the country's land usages and features several of the most intriguing photographers working in Israel today. Represented are 22 works by 14 artists ranging from established, internationally exhibited photographers to several artists showing in New York for the first time.

While it is difficult to separate the personal from the political in Israel, this exhibition contains photographs that also explore Israel's landscape -- placing the emphasis on aesthetic and artistic concerns. The works in Current Visions: Inside Israel (Part 2) offer individual interpretations that reveal interesting social, agricultural, historical, recreational, and archaeological aspects of life in the country.

The remarkable diversity of the Israeli terrain -- a country no larger than the state of New Jersey -- is evidenced in the work of Orit Siman-Tov: one photograph depicts a crowded ski slope at Mount Hermon while another from the same day shows bathers floating in the Dead Sea. An equally unusual contrast can be seen in Rina Castelnuovo's photograph from the Golan Heights depicting a cowboy with his horse alongside an Israeli army tank.

The significance of the land being both cultivated and battled over is not lost on the viewer.
Barry Frydlender, Miki Kratsman, Adi Nes, and Gilad Ophir subtly address the predicament of the country's borders and survival. Ophir's photograph of a bullet-ridden Mercedes jeep depicts one of many captured by the Israeli army from the Egyptians and Jordanians that was later used for target practice in the Negev desert, while Barry Frydlender's image of a couple in the sea raises the question of danger and rescue in the turbulent waters of the Mediterranean.

Photographs by Daniel Bauer, Ori Gersht, and Tal Shochat illustrate interesting and diverse views of the olive tree, a prominent feature of the Israeli landscape that holds important historical, biblical, and political connotations. Bearing in mind the symbolic importance of the olive tree within Israeli society, each artist brings a unique aesthetic approach to the subject, while exploring different artistic and theoretical concerns.

Opening reception on Saturday, March 10 from 6 PM to 8 PM.