With his large-scale photographs he portrays the 21st century as the age of a globalized, capitalistic society and addresses its phenomena such as mass events, stock markets or futuristic architectures. He also continues to devote himself to classical sujets such as landscape. 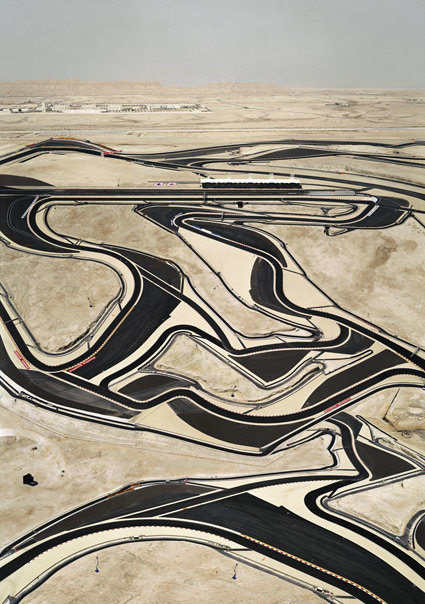 Monika Spruth and Philomene Magers are pleased to announce the opening of their new gallery in London with an exhibition of latest works by Andreas Gursky. This is the first show of works by the artist in the United Kingdom since nine years. In addition, White Cube is going to present more works by Andreas Gursky at Mason’s Yard.

Andreas Gursky was born in Leipzig, Germany, in 1955 and studied at the Folkwangschule Essen and at the Kunstakademie Dusseldorf, where he earned his degree as a master-class student under Professor Bernd Becher. Since the late 1980s, the work of Andreas Gursky was exhibited in numerous solo and group shows. In 2001, the Museum of Modern Art, New York, organized the first retrospective of Andreas Gursky, which then toured to the Reina Sofia, Madrid, the Centre Pompidou, Paris, the Museum of Contemporary Art, Chicago and the Museum of Modern Art, San Francisco. Currently, his second retrospective is on view at the Haus der Kunst in Munich. His works are included in many international institutional and private collections.

For the exhibition at Monika Spruth Philomene Magers in London, Andreas Gursky is showing works from the last five years. With his large-scale photographs he portrays the 21st century as the age of a globalized, capitalistic society and addresses its phenomena such as mass events, stock markets or futuristic architectures. He also continues to devote himself to classical sujets such as landscape.

The work can be composed out of a single shot or out of a number of shots put together using digital technology. The artist proceeds like a painter: he does not remain at the capture of a moment, but creates a composition out of a multiple number of shots. In this manner, images are being created which go beyond the moment and at the same time still show specific situations. For example, the view on the Formula 1 race-track in Bahrain might seem like a courageous abstract composition by the artist but is in fact a minimally manipulated shot of the car race in the desert state, where, on a closer view, some race cars can be deciphered. In this way, Bahrain I is landscape photography. It illuminates the phenomena of the Formula 1 and at the same time seems like an expressive painting. In his work, Andreas Gursky compiles the continuity and objectivity of the medium in the tradition of Bernd and Hilla Becher with the gesture of a painter.

The opposite of mass and individual, the big picture and the detail, is a theme in the work of Andreas Gursky. The majority of his works is taken out of an elevated perspective and the spectator gets a view on the total. Within the mass, the human becomes ornament, be it at the techno party or at the mass ballet “Arirang” in North Korea. Getting closer to the images, single people can be seen, but rather than functioning as recognizable individuals, they are a deputy of the spectator. This way, Andreas Gursky draws the spectator inside his world which is made out of stereotypical images of our information age.

Looking at the photographs, the question arises, how the human species can maintain itself in spite of the increasing speed, at which the world seems to be turning and the overwhelming technology or the struggle for survival within nature. The Formula 1 racing cars in Bahrain I seem tiny on the gigantic race track; the cyclists in Tour de France are overcoming the hardest stage of the Tour de France: again and again the artist shows that the border between overcoming and being overcome seems to be getting continuously thinner.

Not only does Andreas Gursky redefine photography as a medium and presents an image of our times, he also analyzes its structures and asks vital questions: how does the individual exist within the mass and what will this world look like in the future? This discourse is being held with regards to the microcosm of the individual or a single situation on the one side and the macrocosm of the globalized world and its structures on the other side.