The exhibition explores a concept underpinning maritime navigation. On a flat surface, a straight line is defined as being the shortest distance between two points while maintaining a constant direction. However, on the curved surface of the Earth these two properties cannot be true at the same time. 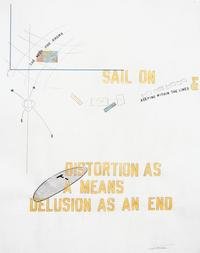 Inherent in the Rhumb Line

"Art is something human beings make to present to others to understand their place in the world." Lawrence Weiner

The National Maritime Museum explores how human beings have sought meaning in the sea, time and the stars. At Greenwich the imponderables of time and space collide: this is the home of Longitude 0°, where one can stand on an arbitrary line marking out the starting point of each new day, year and millennium. Every place on the globe is measured east or west from this Prime Meridian, creating a framework for individuals to understand their place in the world. Lawrence Weiner’s artistic practice questions the subjectivities that create such constructs of understanding. Using observation and experiment, the artist interrogates the relationship of material objects to each other, and the relationship of material objects to individuals.

Since the 1960s, Weiner has insisted that his artwork never assumes a public; rather, it produces one by initiating an engagement with uncertainties. In 1968, in his Statement of Intent, Weiner set the conditions of his practice, declaring: ‘(1) The artist may construct the piece. (2) The piece may be fabricated. (3) The piece may not be built. Each being equal and consistent with the intent of the artist, the decision as to condition rests with the receiver’. The first point suggests that the artist is able to construct the work; the second implies that, by following instructions, anyone can build the work; and the third that the building of the work is not necessary. As with the Prime Meridian, the impetus in his work is to make material and invite engagement with a set of propositions.

This exhibition, Inherent in the Rhumb Line, explores a concept underpinning maritime navigation. On a flat surface, a straight line is defined as being the shortest distance between two points while maintaining a constant direction. However, on the curved surface of the Earth these two properties cannot be true at the same time. The rhumb line is the path of constant compass direction, potentially continuing into infinity. These lines of navigation first appeared on late 13th-century Portolan charts and, in the 16th century, Gerald Mercator’s revolutionary mathematical flat projection made rhumb lines the easiest, although not the shortest, way to steer from one place to another. The Mercator projection distorts the size of the land masses and shows rhumb lines crossing the meridians at a constant angle; were a rhumb line followed around the globe a spiral course would be traced. All maps are inherently metaphorical; they are political tools constructed through historical contingencies that require interpretation. Impositions that model behaviour, and the generality that paradigms evoke, consistently interest Weiner. Inherent in the Rhumb Line questions metaphorical understandings of the world.

Much of Lawrence Weiner’s artistic practice takes the form of language and his statements have been inscribed as text inside and outside the gallery, as well as taking the form of spoken words and printed matter. At the centre of this exhibition the words to a somewhat romantic song, Sailing Sailing, point elsewhere: songs, after all, are designed to be sung and heard, rather than read. Shown beside Weiner’s 2005 film Inherent in the Rhumb Line from which this exhibition takes its name, this song alludes to the freedom of the seas and navigating over the bounding main. As with traditional songs of the sea, Sailing Sailing has been handed down, passed around, reinterpreted and repeated, with each version as true as the next. Twelve drawings punctuate the gallery spaces in reproduced form; as with map-making, each reproduction produces distortion, just as the construction of boundaries distorts actual fact from factual fact. In Inherent in the Rhumb Line Weiner proposes a methodology that uses the rhumb line to lose, rather than find, one’s way: by this means he puts into question the very assumptions used to understand one’s place in the world.

Lawrence Weiner: Inherent in the Rhumb Line is made possible by the support of Arts Council London and The Henry Moore Foundation.