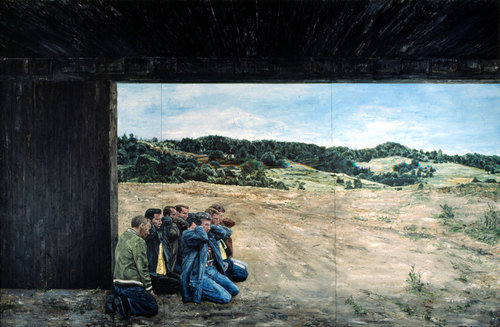 The ancient Mariner was a speaker in Samuel Coleridge's lyrical ballad; 'The Ballad of the Ancient Mariner' (1834).
The ancient Mariner feels urged to tell his tale. His ship was taken up by a storm to the South Pole. A big bird, an albatross appeared in the snowy fog. In itself this was a good omen, yet the ancient Mariner shot the bird with his crossbow. As a consequence he and his shipmates got doomed. The sea suddenly becalmed and another ship came sailing towards them. There wasn't even a breeze. Facing the ghost ship, all its ship mates dropped dead. Ghostly the ship sailed home. Nearing the harbour the pilot took the ancient Mariner off board and the cursed ship sank.
And ever and on throughout his future life, an agony made him travel from country to country and tell his tale.

In the ballad he tells his tale to a wedding guest:

"...
Since then, at an uncertain hour,
That agony returns:
And till my ghastly tale is told,
This heart within me burns.

I pass, like night, from land to land:
I have strange power of speech;
That moment that his face I see,
I know the man that must hear me:
To him my tale I teach..."

"...
The Mariner, whose eye is bright,
Whose beard with age is hoar,
Is gone: and now the Wedding-Guest
Turned from the bridgeroom's door.

He went like one that hath been stunned,
And is of sense forlorn:
a sadder and wiser man,
He rose the morrow morn.