The group show presents works which share the will to develop a new relationship with questions of modernity through the idea of enacted imagination, Canoilas tries to build bridges between abstraction and social realism, Kolding presents his intervention in the Cafe' im Kunstverein. 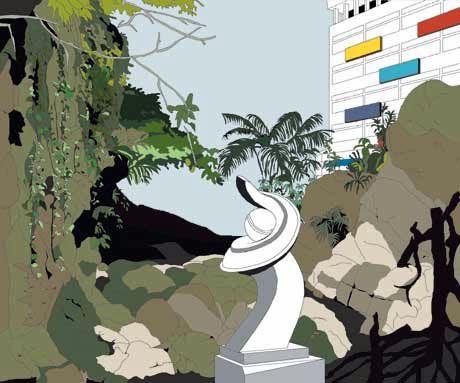 Whenever It Starts It Is The Right Time – Strategies for a discontinuous future.

Is imagination a useful notion for a new way to define the role of artistic practice and its connection to social research? The exhibition "Whenever It Starts It Is The Right Time – strategies for a discontinuous future" at Frankfurter Kunstverein departs from the notion of imagination as defined by the Greek philosopher Cornelius Castoriadis (1922-1997): imagination is a creative power intimately linked with the epistemic act; that is, with our capacity to postulate other realities, a faculty directed towards agency. In this way, this show is about the notion of "enacted imagination" versus the old notion of utopia.

The notion of the enacted imagination relates to the avant-garde project of the early 20th century – the question of how to relate art to life and how to imagine the world differently. Of course the project itself became problematic and ultimately failed in many ways – but it still provides a qualitative challenge to the modernist legacy that now has become simpl y a question of aesthetics. The avant-garde tradition, insofar as it has a link to contemporary art, is a hermeneutic practice, one that talks about content and meaning at least as much as about form. The artists presented in "Whenever It Starts It Is The Right Time" are no longer – and that is possibly the only thesis of this project that can be proven right or wrong – concerned with escaping the category of art, but engaged in using the space that art and even the art institution can provide to constitute new spheres of thinking, feeling, reflecting and exchanging.

All of the works in the exhibition have at least one trait in common: a will to re-establish a new relationship with some of the questions of modernity through the idea of enacted imagination, such as the vital belief in agency. Art production is a system of interpretation that is able to engage in endless points of departure, ‘soften up’ the bureaucratization of tradition and create new routes, new systems of reference.

As the Argentinean conceptual artist Alberto Greco (1935-1965) once stated, "an art work has meaning as long as it is made as a total adventure". An exhibition should be conceived under the same premise.

A catalogue will be published in connection with the exhibition by Revolver Verlag, Frankfurt am Main. Contributions by Charles Esche, Brian Holmes, Raimundas Malasauskas and Chus Martínez.

Ten Reasons to be a Member, #12: Hugo Canoilas: "Vota Octávio Pato (Vote for Octávio Pato)"
For ‘10 reasons to be a member’, the Portuguese artist Hugo Canoilas has developed a new installation of mural paintings displayed within a specially constructed support structure. Canoilas came to establish a dialogue between abstraction and social realism and has slowly been trying to create bridges between the two by using the different languages of painting. The templates that serve Canoilas are not celebrated iconic Neorealist images, but are selected from an online archive of street paintings made in dedication to the Portuguese carnation revolution after 25 April 1974. Under the influence of the Portuguese Communist party, Neorealism emerged as an art of political and social intervention, not so much as an revitalisation of avant-garde strategies but rather as an ‘artistic duty’ from the people for the people.

Canoilas’ choice of paintings and their display bring the full meaning of social struggle into play. The presentation entitled "Vota Octávio Pato", is, in part, paying homage to a leader of the carnation revolution, Octávio Pato, who plunged in clandestinity and suffered in prison, before playing a decisive role in the Portuguese liberation from the fascist Salazar regime.

"Café im Kunstverein: New wall project by Jakob Kolding"
"Cafe im Kunstverein" cannot be understood independently from the rest of the program and the spaces that constitute the Frankfurter Kunstverein as a space for the production and discussion of contemporary art. Architecture shapes the way we see and experience life, therefore it is important to consider what kind of place a café, a bar or a restaurant in an art institution is. Is it a mere annex or can it be integrated in the life of the institution?

After a complex but efficient intervention in the ‘Café im Kunstverein’ through the furniture designs by the Basque artists Xavier Salaberría and Gorka Eizaguirre, a new work specifically created for this site by the Danish artist Jakob Kolding is now being added to the project.

How can urban space be transformed into a real social space? How does urban planning affect our vision of the society we live in, and therefore affect our social behaviour? These are pivotal issues in Kolding’s work, as are questions of youth culture. DJs, graffiti, skateboarders, group identities defined by specific clothing codes as well as by football (like the image of the Liverpool player Kenny Dalglish in that Kolding has put on the wall in the corner opposite the counter) are constantly present as references.