Based on thoughts and memories that arose during a trip to China, Stories are Propaganda is a video shot in Guangzhou in 2005. Pardo's interest in collapsing the boundaries of art goes on. On view will be temperature-controlled wine credenzas that can store over 100 bottles in a delicate honeycomb interior and drawings. 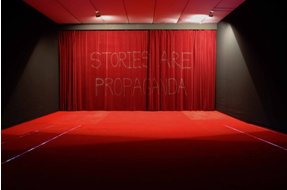 Based on thoughts and memories that arose during a trip to China, Stories are Propaganda was shot in Guangzhou (Canton), China's third most populous metropolitan area, in the summer of 2005. The 8 minute and 40 second long film consists of a series of unrelated scenes shown in quick succession - a TV show, an albino rabbit, a snowman made of sand - which reveal the artists' thoughts in a stream-of-consciousness technique. The voice of a child wistfully recalling days past narrates the film, infusing it with a strangely melancholic tone: "...before you could get an espresso in Hamburg or Milwaukee...when people walked on the moon and snow covered London for weeks during Christmas time...A time when things were not weird, but strange, and then they were really strange."

The film begins with the sentence: "This is a journey through an infinite urban landscape," and it can be argued that the film is a journey through the collaborators' thoughts about experiences, distinctness and displacement. In the installation the dated codes of the cinema - a manually operated red velvet curtain - are immediately contradicted by the title sprayed directly onto the curtain. At the end of the film, the curtain is drawn, and the viewer leaves with a head full of images, stories and memories.

This new body of work continues Pardo's interest in collapsing the boundaries of art, architecture and design through the appropriation of domestic architectural elements, which he transforms into seductive yet practical sculptures. On view will be temperature-controlled wine credenzas that can store over 100 bottles in a delicate honeycomb interior; intricately carved clocks; and groupings of colorful hanging lamps with seaweed-like tendrils. The new paintings, which are silk-screen on unprimed linen, take on a playful, sculptural form with draped garlands and floral appliqués