Making use of a provocative formal vocabulary, the McCarthys have been probing the icons and stereotypes of western culture and its entertainment industry. In their joint works, Paul usually acts as performer and director, Damon as cinematographer and editor, however the projects are conceived and constructed in collaboration. 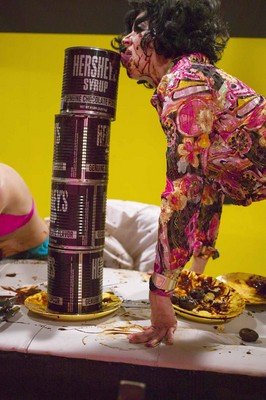 Paul McCarthy (b. 1945, lives and works in Los Angeles) is among the most important and influential artists of his generation in the US. His reputation is that of a critical analyst of a mass media and consumer-driven American society.

Since 2000, he has collaborated closely with his son Damon McCarthy (b. 1973) on a number of complex performative video installations, such as "Caribbean Pirates" (2001-2005), "F-Fort Party" (2005), "Piccadilly Circus" and "Bunker Basement" (both 2003). Making use of a provocative formal vocabulary, the McCarthys have been probing the icons and stereotypes of western culture and its entertainment industry. In their joint works, Paul usually acts as performer and director, Damon as cinematographer and editor, however the projects are conceived and constructed in collaboration.

The show at Galerie Hauser & Wirth will present a series of photo portfolios related to the large-scale projects they produced in recent years. The two artists’ collaboration is based on creative exchange. Their working relationship when developing and realising their projects is conceived in terms of an independent film studio. All collaborators (director, cast, camera operators, producer) work together in an open hierarchy where the improvised and unforeseeable play an essential part.

The photographs by Ann-Marie Rounkle were taken during the performances. They serve to document the performance aspect of the works, and at the same time are an integral part of the creative process.

"Pirate Party Photograph Portfolio" and "Houseboat Party Photograph Portfolio" originated in the installation/performance "Caribbean Pirates", first shown as part of the "LaLa Land Parody Paradise" exhibition at Haus der Kunst, Munich (2005). This work is the result of an examination of various incarnations of the pirate figure as a myth of American popular culture, including its propagation and reception by the media and the public. It also highlights the function of the pirate as a symbol of invasion, plunder and destruction. The original inspiration for the work was Disneyland’s "Pirates of the Caribbean" attraction.

The houseboat sequences, loosely related to the pirate story, also make reference to the film of Edward Albee’s "Who’s Afraid of Virginia Woolf?" (1966) with Elizabeth Taylor and Richard Burton. They are centred on the theme of the degeneration of domestic order.

The project was realised at Paul McCarthy’s studio in California, east of Pasadena. According to the artist, the studio is really the ideal location for the "Caribbean Pirates" complex, since it is the place where Paul, Damon and their cast and crew first constructed the extravagant sculptural scenarios of the performances. The sheer scale of the project is testimony to the McCarthys’ efforts to move artistic production beyond the traditional museum setting. Their works are a deliberate challenge to the museum space and a demonstration of its limits.

"Piccadilly Circus" and "Bunker Basement" were produced in 2003 for the opening of the Hauser & Wirth gallery space in London. The Victorian interior of the former bank building on Piccadilly is the scene of a performance and video installation featuring George W. Bush, Osama Bin Laden and the Queen Mom (in three versions). The cartoon-like characters with their oversized masks and clownish costumes are shown indulging in crazy teen parties and wild eating rituals. The videos portray them not as the real-life persons, but as ciphers for different social, religious and value systems.

"F-Fort Party Photograph Portfolio" (2005) features another male American myth – the potent, nature-loving cowboy. The video for "F-Fort Party" was shot at Haus der Kunst, a cast of German actors dressed as late-1800s western American cavalrymen frolic and videotape this male bonding buffoonery in a plywood set of a western fort and in Munich’s English Garden.

In the McCarthys’ works, rhetorical excess and endlessly repeated gestures bordering on absurdity serve to subject the myths of our society to a process of abstraction. Order is dissolved into chaos. Paul und Damon McCarthy appropriate "the masks, body gestures, sets and scenarios of Hollywood so as to uncover what lies beneath its masquerade; namely drives and affects that – while utterly playful – are always also destructive" (Elisabeth Bronfen).
Pirate and western mythology are two recurring themes in Paul McCarthy’s work. Both represent isolated, alternative worlds, clichés that set off an intricate play on reality and deception, truth and representation, to challenge our traditional perceptions.
Paul and Damon McCarthy’s space-filling installations combine highly diverse approaches and media: architecture, stagecraft, sculpture, painting and multiple video projections.
The fragmentary nature of these complex work groups is reflected in the photo portfolios.

Until May 28, 2007, the Aros Kunstmuseum in Aarhus is showing the retrospective "Paul McCarthy. Head Shop/Shop Head. Works 1966 – 2006" (October 12, 2007 – February 17, 2008, at the Stedelijk Museum voor Actuele Kunst, Gent). From May 27 until October 28, 2007 the Middelheim Sculpture Museum in Antwerp will show "Air Borne", an exhibition exclusively devoted to Paul McCarthy’s Inflatables, large scale outdoor sculptures.