Stella Capes - Christina Hemauer and Roman Keller. A Curiosity, A Museum Piece And An Example Of A Road Not Taken. If theese exhibitions strives in addressing the viewer directly, it is not only to perform, but to counter the madness of a world in which human values are lost and forgotten, seemingly powerless against derision. 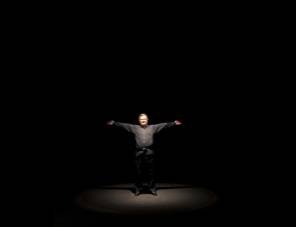 If this exhibition strives in addressing the viewer directly, in existential and committed terms, it is not only to perform, but to counter the madness of a world in which human values are lost and forgotten, seemingly powerless against derision.

In 2006 Christina Hemauer (*1973) and Roman Keller (*1969) organised an event entitled Post-Petroleum at the Kunsthof in Zurich and, in fact, they already had the mission to pursue an adventure they called A Moral Equivalent of War: a Curiosity, a Museum Piece and an Example of a Road not Taken. By questioning the energetic crisis which came up in the 1970s, these artists adopt a humanist approach to the exploration of such universal themes as history and collective memory. Perhaps we ought to mention certain historical events. On 18 April 1977, Jimmy Carter delivered the following warning concerning the effects of the energy crisis to the American people : "Tonight I want to have an unpleasant talk with you about a problem unprecedented in our history. With the exception of preventing war, this is the greatest challenge our country will face during our lifetimes. The energy crisis has not yet overwhelmed us, but it will if we do not act. [...]" (sic) "We simply must balance our demand for energy with our rapidly shrinking resources. By acting now, we can control our future instead of letting the future control us. "

On 23 January 1980, Jimmy Carter made public his plan, which this time contained a double message, warning other powers as such "Let our position be absolutely clear : An attempt by any outside force to gain control of the Persian Gulf region will be regarded as an assault on the vital interests of the United States of America, and such an assault will be repelled by any means necessary, including military force." In 1990, President George H. W. Bush invoked the Carter Doctrine of 1980 to legitimise the Gulf War. The project by Christina Hemauer and Roman Keller revolves around the search for the solar panels that Jimmy Carter ordered to be mounted on the roof of the White House in 1979. The exhibition unfolds in two parts. Between fiction and reality, the first room investigates the role of history. It recalls Jimmy Carter’s 1979 declaration which is replayed by Arthur Bowler during the Fri-Art opening, and redefines his statements, sounding out the viewer’s true position. In the second space, the artists set out on a journey from the State of Maine to the Carter Foundation in Georgia to restore these panels, placed under seal. They confront present and past. Passing through Washington and the White House they build a bridge between Unity College in Maine and the Carter Foundation in Atlanta, by linking education, social and cultural issues. Via this trip, the artists meet scientists and researchers as well as Jimmy Carter. They give concrete shape to the President’s message, transforming the panels into museum pieces: A Museum Piece. Thus, the latter’s words become a work of art exhibited in Fri-Art, and a reflection by the artists. In an epic mood, this work seems to travel not only through close and remote regions, but also through the history of the past three decades.

On the first floor, English artist Stella Capes (*1978) presents her first individual exhibition in Switzerland. This artist uses a variety of artistic idioms, including videos and installations as well as performances. Humour and melancholy weave a unifying link between these works. Humour and melancholy accompany The Performance and The Great Darkness, for example, two works which introduce us to persons who pursue an unrealistic aim, and are thus condemned to fail. Stella Capes puts her humour to work in the interest of an oblique pessimism. The viewer is confronted with these efforts and eagerly awaits their solution, making even more evident the pathetic nature of the protagonists’ vain attempts. As in the videos of Bruce Naumann, a situation’s burlesque character is heightened by repeated action, causing the viewer to feel ill at ease. The works of Stella Capes generate a melancholy and unease comparable to that in a Samuel Beckett or Harold Pinter play, casting a sharp light on individual vulnerability. From Ravenser Odd speaks to us about the fragility of the individual confronted with ephemeral nature, evoked by a piece of land with a life cycle of at most 250 years. Yet the works of Stella Capes are also harbingers of hope and clairvoyance – the hope that stands behind all of human activity and drives those who pursue their dreams.