The exhibition strives to create a context for younger artists by contrasting them with more historical figures. The practice of each of the included artists is emphasized; their investigation into painting's failures or limitations have paradoxically resulted in a new way to look at the medium. 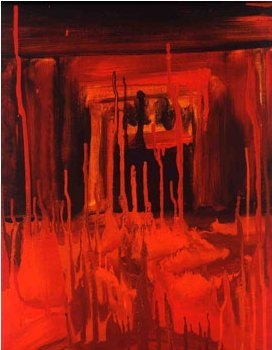 Based on the notion of “accidental painting”, the exhibition strives to create a context for younger artists by contrasting them with more historical figures in order to generate a dialogue and, in turn, elevate the artist in a framework where they belong. The practice of each of the included artists is emphasized; their investigation into painting’s failures or limitations have paradoxically resulted in a new way to look at the medium.

The exhibition will focus on the intrinsically embedded physical properties of the included works with the way this group of artists underline the importance of mistakes and chance. The varied processes or treatments of material will be emphasized. The aesthetic and conceptual relationship and the exploration and challenging of the tropes and expectations of traditional abstract painting are highlighted.

Richter’s fundamental motivation throughout his long career has been to question and challenge the perceived abilities of painting. Oehlen combines photographic elements with the painted canvas by attaching them directly to its surface in order to break down the notion of “pure painting.” Much like Polke and Oehlen before him, Glenn Brown embraces the contentious traditions of painting with a sophistication that comes from his ability to produce a stunning canvas by working through his conflicted notion of painting. Polke’s irreverence for conventional techniques and materials and his lack of allegiance to any one mode of representation is emphasized, as is the implications of a complicated narrative that come through in his multi-layers. Bauer uses attenuate mark making as a departure point for invention: shapes suggest themselves through impulsive drips and washes resulting in something intuitively spontaneous yet carefully contrived. Rosson Crow’s slick and vibrant paintings of proverbial environments pulse with saturated tension. Crow uses lustrous paint and leaching marks to illustrate a referential dissolution of historical interiors and cultural allusions and render luxuriant spaces that appear to collapse in upon themselves. Whether working from an image and builds on top of it in order to pervert it or subverting the image by pulling figures out of abstraction as is Van Lankveld’s method, theses artists are defenders of painting’s relevance while also recognizing its redundancies.