Inhabiting the border between straight photography, performance and sculpture, Graafland's photographs are records of her highly choreographed live performances in the salt deserts of Bolivia. Fascinated by the surreal beauty of the harsh natural landscape she utilises this as her canvas. 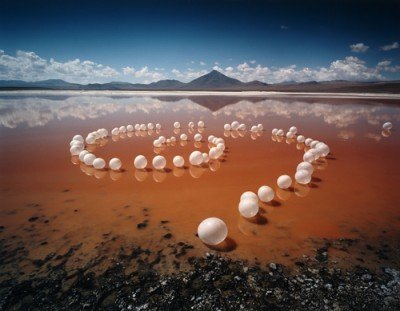 "... the chance encounter of a sewing machine and an umbrella on a dissecting table (can provoke) the most powerful poetic detonations" Le Comte de Lautréamont, Les Chants de Maldoror, 1868. We are delighted to announce the first UK solo exhibition of work by Dutch artist Scarlett Hooft Graafland. Inhabiting the border between straight photography, performance and sculpture, Hooft Graafland's photographs are records of her highly choreographed live performances in the salt deserts of Bolivia. Fascinated by the surreal beauty of the harsh natural landscape she utilises this as her canvas. Anthropologically curious, her ideas emerge directly from the local mythology that originates in this otherworldly environment.

Using naïve and childlike colour palettes her photographs draw on the language of the surreal showing familiar objects out of context (a llama wearing balloons, top hats flying through the desert and a pair of naked legs entwined around a cactus). Her humorous and unsettling juxtaposition of these everyday objects with the sparse, unforgiving landscape echo the aesthetic of surrealists such as Rene Magritte. Hooft Graafland utilizes the medium of photography, associated with the representation of truth, to represent the fantastic and the irrational.

Vanishing Traces, a homage to land artist, Robert Smithson, is made out of floating balloons at Laguna Colorada in southern Bolivia. Smithson was inspired to make his original piece after reading about this particular red salt lake (Laguna Colorada) in the book Vanishing Traces of Atacama by William Rudolph. Due to the remoteness of the location however, Smithson installed his work in the Great Salt Lake in Utah. Graafland has returned to the place of his inspiration, with her team, to build her own transient spiral balloon jetty. The clean simplicity of her finished works offer no indication of the difficulties in accessing and working in such inhospitable terrains. Highly dependant on the collaboration of the local people, her journeys are indebted to the assistance of the local people and artists with which she works.

Born in the Netherlands in 1973, Graafland is based in both Amsterdam and New York. She has studied at the Royal Academy of Fine Arts, The Hague, Bazalel Academy, Jerusalem and Parsons School of Design, New York and has travelled to Iceland, Israel, Canada and the United States for her work. Her work has been exhibited in solo exhibitions all over Europe and as part of group shows at the Metropolitan Museum. New York, and the Musee D'Orsay, Paris amongst others.