From a Western Song 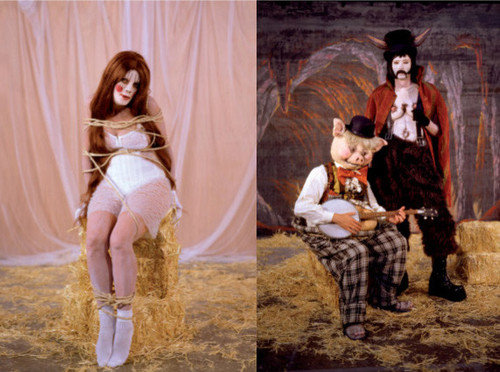 From a Western Song

Emily Tsingou Gallery is pleased to present the second solo show in London of LA-based artist, Marnie Weber. “From a Western Song” is a collection of works related by a common narrative – an otherworldly tale of abduction and emancipation. Marnie Weber is the most prominent female artist to emerge from a generation of LA-based artists which includes Mike Kelley, Jim Shaw and Paul McCarthy. Her practice is concerned with issues of identity, childhood and sexuality, explored through the coincidence of the real and surreal.

The exhibition includes a16mm film whose plot continues the artist’s ongoing fictional narrative “The Spirit Girls”, the premise of which is a spectral reincarnation of a 1970s girl band. The protagonist, played by Weber, sets out alone on an adventure of self-discovery, during which she is incarcerated by a bizarre collection of hybrid creatures. Set in a ghost-town with a western theme, the film is an deranged vision infused with an eerie mix of electronic rock, Circus fairground, gypsy and farmyard imagery. The tragi-comic pathos of this body of work is personified in the motif of the Hobo-clown, synonymous with the American depression. Harking back to a time of wandering vagabonds, Weber’s dark humour is a humanistic approach to sadness and crisis.

There are qualities of the hand-made in all Weber’s work – artifice is exposed, if not celebrated – from the traditional “cut-and-paste” collages which acknowledge a Surrealist heritage (a particular reference to Hannah Höch) to the Ghost Clown sculptures with their humourously evident illusion. The influence of Surrealism can also be felt in a sense of spiritualism and an exploration of the unconscious. The nineteenth century Spiritualist movement gave women their first a public voice, only by channelling other’s words and as such has been acknowledged in relation to feminism. It is this notion of subjectivity, rendered through different personas, that underpins the artist’s post-feminist agenda.

Weber appears in her work as a varied array of characters - a Geisha, a bunny, a circus girl - in a vicarious exploration of identity. Throughout her practice, these characters have been reprised in live performances, videos and photo-collages, and a sense of transformation inherent in the passage of time is apparent. Analogous to the character-transformation of supposedly benign Fairytales, Weber investigates a darker side of storytelling traditions.

Marnie Weber lives and works in LA. In 2005 a survey show of her work was exhibited at the Luckman Fine Arts Gallery (LA) with an accompanying catalogue. Her work is held in the public collections of The Los Angeles County Museum of Art, USA and FRAC, Paris, France amongst others.