A group show including 20 artists with work spanning over 100 years of bloodless revolution. "The Male Gaze" features contemporary artists and their classic antecedents reinventing themselves, their world, and their media. 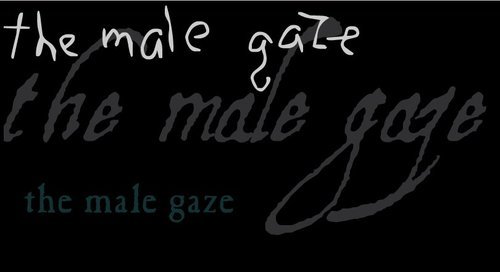 A group show including 20 artists

Stephen Andrews has exhibited his unique body of work, an exploration of memory, identity, the body, and the body politic, in Canada, the U.S., Brazil, Scotland, France, India, and Japan. He is represented in the collection of the National Gallery of Canada, as well as many private collections. Andrews’ most recent exhibits, P.O.V. and Apostles, were seen at the Paul Petro Gallery, Toronto.

James Bidgood was born in Madison, WI in 1933, and completed the bulk of his creative output from a midtown tenement in the 1960s. His revolutionary photography has inspired figures like David LaChapelle and Pierres et Gilles, and his film Pink Narcissus is widely acknowledged as a masterpiece of gay cinema. Bidgood has exhibited his work at Paul Morris Gallery, ExitArt, and ClampArt, New York City, and other venues here and abroad. His eponymous monograph was published by Taschen in 1999.

Gio Black Peter (born Giovanni Andrade) was born in Guatemala and migrated illegally to the United States with his family at the age of 5. Black Peter’s artworks and music incorporate outsider experiences drawn from his travels and life in New York. The name “Black Peter” is taken from the folkloric elf who brings “bad” presents to bad children on Christmas.

AA Bronson lived and worked as part of the renowned artist group General Idea from 1969 through 1994, when his two partners died of AIDs-related causes. Together they had over 100 solo exhibitions world-wide and participated in some 150 group exhibitions, including the Paris, Venice, Sydney, and Sao Paulo Biennales, and Documenta. Since 1999 he has worked under his own name, with solo exhibitions internationally, including at the Vienna Secession, the Museum of Contemporary Art Chicago, the MIT List Visual Arts Center, and the Power Plant, Toronto. He was included in the 2000 Montreal Biennale and the 2002 Whitney Biennale. He is a founder of the seminal artists’ bookstore Art Metropole, Toronto, and currently Director of Printed Matter, New York City.

Raymond Carrance (1921–1998) was a talented photographer and book illustrator working in the 1950s and 60s who created a private catalogue of homoerotic dreamscapes under the pseudonym “Czanara.” Little is known about him save that had several exhibitions in Paris in the 1960s and 1970s, and illustrated probably half a dozen elaborate books, including an edition of Montherlant’s gay classic La Villedon’t Le Prince est un Enfant. Antinous Press, distributed by powerHouse Books, will release a book of his work this spring.

Robert Filippini is a New York–based artist working in various media including text, video, painting, and installation. In the early 1990s he lived in Moscow and Berlin, producing agitprop and co- founding the AIDS relief organization RAR. He has been exhibited and published widely throughout Europe and America. He is currently working on a map of the world.

Christian Holstad is one of today’s most celebrated young artists. His work has been exhibited at and is included in the permanent collections of the foremost art institutions in the world. His first monograph will be published by Aschenbach Editions/powerHouse Books in fall 2007.

Scott Hug and Michael Magnan are an internationally-exhibited art duo. Their most recent installations of social and political provocation, Wookies Need Love Too and Boys Gone Wild, have been exhibited at the Hiromi Yoshi Gallery, Japan, and John Connelly Presents, New York. Hug is also a curator and the founder of K48, an annual art fanzine. Michael Magnan is also the founder of the textile design and fashion organization Do Not Provoke Us.

Brian Kenny was born in Heidelburg, Germany on an American military base in 1982. Kenny’s work integrates many of his diverse life experiences, such as his background in competitive gymnastics, extensive travel during his youth with his family, and his urban life as a wigger. Since 2005, Kenny has been collaborating with Slava Mogutin under the team name SUPERM. Together they have displayed work in exhibitions in New York, Los Angeles, Moscow, Berlin, Paris, Oslo, Stockholm, and Leon, Spain.

Bruce LaBruce is a Toronto-based filmmaker, writer, and photographer. Over his long career, he has co-edited a punk fanzine called J.D.s that begat the queercore movement, directed and starred in three feature length movies, No Skin Off My Ass, Super 8 1/2, and Hustler White, directed two art/porn features, Skin Flick, and The Raspberry Reich, and written a premature memoir entitled The Reluctant Pornographer. LaBruce was a contributing editor and frequent writer and photographer for Index magazine, and is or has been a regular contributor or photographer for Eye, Exclaim, Dutch, Vice Magazine, Nerve.com, BlackBook, Honcho, Inches, Dazed and Confused, Bon, Tank, Tetu, Fake, Attitude, and Blend. His forthcoming book Bruceploitation (Aschenbach Editions/powerHouse, 2007) delivers everything the title promises: Bruce LaBruce, hogtied and ready to be abused.

Qing Liu was born in Fujian Province, China. He received his BA from the school of Art and Architecture at UCLA in 2004 and MFA from Columbia University in 2006. His photography, text work, drawings, videos, and sculptural installations navigate within a system of the political and cultural structures to investigate the idea of existence through his unique relationship with the external world. His text pieces, written directly onto the walls of gallery spaces and other venues, describe fragments of a sometimes-alternate reality. He has been included in group shows in such venues as Whitebox and Momenta Art, New York City.

Ryan McGinley’s first collection of photographs, The Kids are Alright, began with a homemade book of photographs sent to 100 editors and artists and went on to make McGinley, then just 24 years old, the youngest artist in history to hold a solo exhibit at the renowned Whitney Museum of American Art. McGinley’s work has been widely and internationally exhibited and published.

Futoshi Miyagi is Brooklyn-based Japanese artist. His diverse body of work includes sculptures, photographs, artist books, and other objects concerned with ideas of selfhood, national and sexual identity, and the imaging of childhood and memories. Included in The Male Gaze is a sculpture that has never before been shown.

Slava Mogutin was the last political dissident from the former Soviet Union. He has received both critical acclaim and official condemnation for his outspoken writing. Chased out of his country at the age of 21, he was granted political asylum in the US with the support of Amnesty International and PEN American Center. Mogutin is the author of seven books in Russian, and his writing has been translated into and published in six languages. His photography has been exhibited internationally and featured in such diverse publications as i-D, Honcho, Visionaire, Bound & Gagged, BlackBook, Playgirl, Butt, and Stern. His monograph Lost Boys (powerHouse Books, 2006) was profiled everywhere from Butt to L’Uomo Vogue, and sold through its first printing in about a week.

j. morrison is an Brooklyn-based artist and designer. His work is currently featured in the Into Me/Out of Me exhibition at the MACRO Museo d'Arte Contemporanea in Rome, which has shown at PS1 and KW Institute for Contemporary Art; he has exhibited at the first New York Art Book Fair, Printed Matter, Exit Art, New York City, and has designed work for Proto-type Theater, Jane magazine, Xiu Xiu, Phiiliip, and others. James prefers "j. morrison" to avoid any unfortunate "Doors" references.

Will Munro is a Toronto-based installation artist and promoter. He was born in 1975 and is a graduate of the Ontario College of Art and Design. His work has been exhibited extensively in commercial and artist-run galleries including Paul Petro Contemporary Art, and reviews of his work have appeared in Dutch, Mix, Now, i-D, and Lola.

Paul P. has held recent solo exhibitions at Marc Selwyn Fine Art, Los Angeles, Galerie Thaddaeus Ropac, Paris, and Daniel Reich Gallery, New York, as well as notable group exhibitions at Mary Boone Gallery and David Zwirner Gallery in New York and the Power Plant in Toronto. His work has been profiled and published in numerous art and fashion magazines. Recently he collaborated with designer Hedi Slimane for the spring 2006 Dior Homme campaign, which featured his drawings. A number of his drawings are in the collection of the Museum of Modern Art, New York. P. was born in Canada and currently lives in Paris. His forthcoming monograoh Nonchaloir (Aschenbach Editions/powerHouse, spring 2007) is a collection of his work from the past four years.

Jack Pierson is represented by more than a dozen galleries around the world and has exhibited at the P.S.1 Contemporary Art Center, New York, Taka Ishii Gallery, Tokyo, and ZKM, Karlsruhe, to name a few. His multi-faceted work spans two decades, and has been exhibited at or is in the collections of most of the world’s major art institutions.

Ezra Rubin is a Brooklyn-based artist and musician, who performs under the name Kingdom. Rubin holds a BFA from the Parsons School of Design. His work, composed largely of pattern samples taken from the internet collaged into 3-dimensional spaces, has been shown at such venues as Second Gallery, Boston, and Dinaburg Arts, Gallery W52, and Andrew Kreps Gallery, New York.

Paul Mpagi Sepuya’s frank, intimate portraits of close friends (and the occasional stranger) and related artworks from the past few years have been widely exhibited, at such venues as Art Basel (with Printed Matter and Art Metropole), and Daniel Reich and Stefan Stux galleries in New York City. Sepuya is known for his series of portrait-zines entitled SHOOT, and his projects have been published in magazines such as BUTT, Eyemazing, They Shoot Homos Don't They?, and Straight to Hell. His first solo exhibition opens this May at Envoy in New York City. Sepuya currently lives and works in Brooklyn, NY.

Lionel Smartly is a New York-based artist who works in various media.

Wilhelm von Gloeden (1856–1931), pioneer of open-air photography and master of pastoral nudes of Sicilian boys in the Greek and Roman style, openly published and exhibited work with lucid homoerotic implications during a time synonymous with homophobia and pedantry. powerHouse Books is pleased to present his vintage prints during the run of The Male Gaze.