The exhibition looks at artists referencing cultures outside of their own ancestral, ethnic or personal identity. These artists, living in occidental environments, address multiple concerns within the context of debates surrounding otherness. 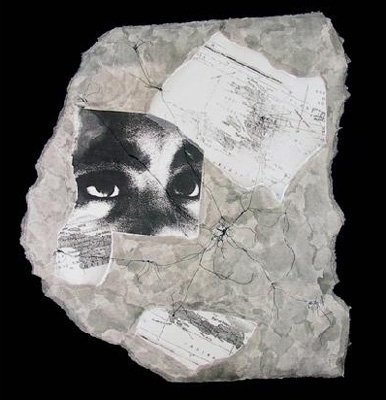 Black, White, East, West--where are the lines drawn on the cultural map and how do artists break the rules and slip across the borders? When does our cultural melting pot reach the boiling point? The Occidental Artist, a group exhibition curated by Heather-Marie Davis, looks at artists referencing cultures outside of their own ancestral, ethnic or personal identity. These artists, living in occidental environments, address multiple concerns within the context of debates surrounding otherness. "Primitive," "naive," and "uncivilized" are terms often used to describe the "other." But who exactly is the "other" in our contemporary time of globalization? Reinterpreting given notions of identity and disordering some of the codified terms of ethnic politics, The Occidental Artist negotiates around a complex legacy of Orientalism and Africanism.

Aileen Bassis uses photo-based imagery in prints, installation and book arts to make work about a variety of social issues. She looks across geographical borders and historical time frames to investigate subjects such as the Holocaust, 9/11 and immigration. She uses simple materials to create immediate emotional impact. Tamar Hirschl also has a wide ranging viewpoint. Having emigrated to Israel from Croatia in 1948, she speaks five languages and has traveled to 33 countries in just the past five years. Hirschl draws on this wealth of experience to explore the forces that separate peoples, nations, and religions. Recently she began exploring the use of collage with a series of three-dimensional works which contain human and environmental elements in aquariums of cast acrylic resin.

Contemporary Japan provides an opportunity to observe the fascinating collision of occidental and oriental cultures. From the perspective of living in the United States, Yuji Hiratsuka explores the layers of sociological artifacts found co-existing in his native Japan. Using intaglio and chine colle, Hiratsuka combines Japanese kimono designs and overtly western fashion for a wry, metaphorical reflection on the human condition. Karen Tam's work looks at another point of oriental and occidental interaction and influence in popular culture. Tam, interested in identity and authenticity, deals with the history of the Chinese diaspora, especially its close connection to the emergence of Chinese restaurants and cuisine in North America. She embroiders on rice-bags, looking at stereotypes of the Chinese, the Avian Flu (aka Asian Flu), and village riots in China, among other issues.

Sophie Sanders cuts and collages textile images in a process which she calls "textured fabric relief." In these works, she translates movement, rhythm, and emotion from her study of African dances into painted and incised gestures. In a variety of visual media, she explores aspects of layered identity and constructs of beauty. Katherine Daniel's work also explores a tactile beauty, referencing a mix of ornamental styles, from the quilts of her Appalachian roots to Islamic and Asian textiles. She strings beads onto wire and then weaves forms out of these strands. Speaking to the rich history of beads used in prayer, ceremony, and commerce, the act of stringing beads is both tangible and metaphysical. Taking a different approach to the inherent associative meanings of materials, Franky Laude addresses youth culture in Haiti by employing a strategy of defamiliarizing everyday objects in installations. The artist takes a humble utilitarian item, the wooden spoon, and transforms it into an elegant mandala.

Born and raised in New York City, with an American and European art school education, Alice Mizrachi's work illustrates the rawness and spontaneity of modern urban culture and the relevance of historical narrative. With an amalgam of "outsider" folk art styles and allusions to African "primitivism," her colorful paintings draw upon an adept sampling of culturally significant visual languages as a platform to voice social and political concerns.