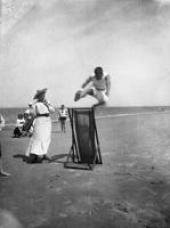 The themes of the Dutch Eyes exhibition were chosen for their significance to the history of photography as well as to the country's cultural history. Areas of particular interest include distinctive 19th-century photographs taken by engineers, the debate about photography's status as an art form at the start of the 20th century, the catastrophic flood in 1953, the former colonies, and "the self-critical gaze". This thematic approach makes it possible to see work by famous photographers alongside work by unknown figures who wielded the camera. The exhibition includes an abundance of work that has never previously been shown, from collections including those of the Rijksmuseum, Stedelijk Museum Amsterdam, Leiden University's Print Room, Amsterdam City Archives and the Nederlands Fotomuseum.

The exhibition coincides with the publication of Dutch Eyes, a new and authoritative history of photography in the Netherlands, produced by Waanders Publishers under the auspices of the Stichting Fotografie in Nederland (Foundation for Photography in the Netherlands). The book's editors are Adi Martis (Utrecht University), Anneke van Veen (Amsterdam City Archives), Flip Bool and Frits Gierstberg (Nederlands Fotomuseum), Hripsimé Visser (Stedelijk Museum Amsterdam), Ingeborg Leijerzapf (Documentation Centre for Photography, Leiden University) and Mattie Boom (Rijksmuseum).

First permanent home for the history of Dutch photography

The semi-permanent exhibition Panorama Las Palmas sets out from the Wilhelmina Pier to explore 150 years of photography by tracing the development of Rotterdam and its port in a one-kilometre radius around Las Palmas. The oldest known photograph of Rotterdam (c. 1850) is being shown in public for the first time, together with many exceptional photos of the former polders, early construction activities, departing emigrants, the ravages of the Second World War, post-war reconstruction and the development into today's Kop van Zuid. The exhibition includes photo albums, amateur photos, films and anaglyphs, presenting work by renowned figures such as Hameter, Rotgans, Jannes Linders and Carel van Hees. Scheduled to continue for a year and a half, Panorama Las Palmas is the first semi-permanent overview of the history of Dutch photography.