The Centre is celebrating its 30th anniversary with 'Airs' de 73 contemporary artists, architects and designers. The title echoes that of a piece by Marcel Duchamp, with a retrospective of whose work the Pompidou opened in 1977. Consisting of two parts, the exhibition presents works from the Seventies to the present, on the theme of the city and urban life. It treats Paris as a point of convergence and themes such as biotechnologies, communities, vertical landscapes, intimacy. From Louise Bourgeois to Adel Abdessemed, Anri Sala or Daniel Buren, all contribute their point of view. 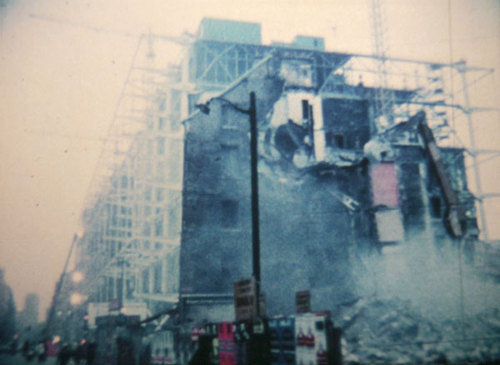 The Centre Pompidou is celebrating its 30th anniversary with "Airs de seventy-three contemporary artists, architects and designers. The title echoes that of a piece by Marcel Duchamp, with a retrospective of whose work the Centre Pompidou opened in 1977.

Consisting of two parts, the exhibition presents works from the Seventies to the present, on the theme of the city and urban life. It treats Paris as a point of convergence, where the exhibited artists may have lived or worked or intervened.

The part devoted to the visual arts (1500 m2) is divided into ten sections organised around themes suggested by the works exhibited. These explore, through the artists' eyes, the technological, economic and social changes undergone by the city and the new communities and cultures that have emerged in it, together with the new perceptions of space and time associated with these transformations. The exhibition examines the notions of the risk society and of urban ecology, and offers responses to questions concerning the place of the individual (and its redefinition) in the urban space.

Among the artists shown are some linked with the Centre's history, such as Marcel Duchamp, Gordon Matta-Clark, Chris Marker, Gérard Gasiorowski and Raymond Hains. There are also new works by Tatiana Trouvé, Carsten Höller, Stéphane Calais, Jean-Luc Moulène, Daniel Buren, Saâdane Afif, Dominique Gonzalez-Foerster and Nan Goldin, among others.

The part devoted to architecture, design, landscape and urban planning (500m2) offers an exhibition space that spirals up from a car park...to the surface of Mars.

INTERNET FORUM
http://www.centrepompidou.fr/airsdeparis
The Centre has set up an internet discussion forum, intended by the curators as a background to the exhibition, which gathers together reflections on the themes of the exhibition by leading figures in the arts and in urban research. Moderated by philosopher Elie During and sociologist Laurent Jeanpierre, it is organised around four major themes: Forms and Cartographies, which looks at the way we think the city and attempt to structure it formally; Uses and Experimentations, which deals with the way in which urban space is used, appropriated and sometimes transgressed by its inhabitants; Escapes, a more conceptual thread that examines certain key ideas such as threshold, frontier, utopia, plan and place; and Constitutive Elements, which invites participants to think concretely about the meanings of certain clearly defined urban spaces such as streets and squares. Among the contributors are Nicolas Bouyssi, Jill Fenton, Antoine Hatzenberger, Salvador Juan, Christophe Kihm, Laurent de Sutter, Didier Talagrand, Jean Louis Violeau and Dork Zabunyan.

AROUND THE EXHIBITION
Spectacles Vivants
The Spectacles Vivants will present performance pieces involving visual artists, musicians and choreographers, among them a first-time collaboration between Xavier Veilhan and the Paris musical duo Air, on 6 and 7 April 2007, at 8.30 pm in the Grande Salle (also at the Tate Gallery, London, in May 2007), and an original work by Forced Entertainment (refering to "Douleur exquise" by Sophie Calle).

FORUMS DE SOCIÉTÉ
The Forums de société will organise a series of talks in May and a colloquium in September, intended to foster dialogue between artists, philosophers and sociologists on the question of the urban in contemporary life.

PARTENARIAT
A series of accompanying events has been organised in partnership with the TRAM network. http://www.tram-idf.fr