Three Sheets To The Wind. Known for her early projects employing natural materials, on the occasion of this exhibition, Gallaccio is investigating the potential of macrame', the craft of tying string or rope into decorative knots. Each net was constructed as square grid which was designed to hang on the wall in varying compositions. For her, the nets are a way of making drawings without leaving a personal mark. 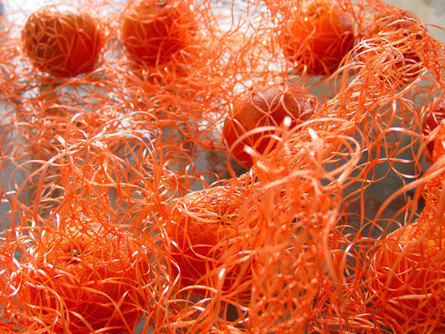 Three Sheets To The Wind

I like not knowing what is going to happen. I don’t want to illustrate a process. The process is what I’m interested in, so I have to extend that vocabulary. It’s a collaboration between the material and me.
Anya Gallaccio, 2006

The directors of the Thomas Dane are pleased to announce Anya Gallaccio’s first exhibition at the gallery. Anya Gallaccio emerged in the late 1980s as part of the group of young British artists from Goldsmiths. Since her first appearance in the 1988 Freeze exhibition, she has become established internationally, having recently exhibited at the Sculpture Centre, New York and Palazzo Delle Papesse, Sienna. She has exhibited widely in the UK including the ICA, Serpentine and Ikon in Birmingham. Gallaccio was nominated for the Turner Prize and received the prestigious Sculpture Commission for the Duveen Gallery at Tate Britain in 2003.

On the occasion of this exhibition, Anya Gallaccio is investigating the potential of macramé, the craft of tying string or rope into decorative knots. Her interest in macramé grew out of a collaboration in 2004 with a fisherman in Holland to make a series of wall-based nets of gold lame thread. Each net was constructed as square grid which was designed to hang on the wall in varying compositions. For Gallaccio, the nets are a way of making drawings without leaving a personal mark. Her many collaborations over the years with crafts people and bronze foundries allow here to explore the essence of each material while also distancing herself from the work. Gallaccio’s current macramé project takes the nets one step further: the artist’s hand is revealed. Unusually for Gallaccio, in this instance the technique was self-taught rather than a collaboration with a macramé expert.

For Gallaccio, macramé is a self-generating system of knots, with the possibility of infinite expansion and elaboration. Within the act of making such patterns is the literal possibility of undoing and unravelling. Gallaccio’s exhibition also pays homage to Marcel Duchamp’s chaotic ‘One Mile of String’ installation for the ‘First Papers of Surrealism’ exhibition in New York in 1942. Eva Hesse’s hanging, tangled string sculptures of the late 1960s and early 70s are also called to mind. There is an element of chaos and uncertainty which Gallaccio embraces as fundamental to the realization of her work and ideas.

As Briony Fer reflects on in her book ‘The Infinite Line: Remaking Art After Modernism, ‘if repetition is a means of organizing the world, it is equally a means of disordering and undoing it’. Within this exhibition, Anya Gallaccio literally acts out this tension.
Editor's Notes

Anya Gallaccio was born in 1963 in Scotland and studied at the Kingston Polytechnic and Goldsmiths. She currently lives and works in London and California. Anya has been working with Zelma Long, a master wine-maker in Sonoma, California , to produce six distinct Zinfandels as a portrait of the landscape, the grapes selected from 5 particular vineyards across Sonoma County. Gallaccio’s works are held in a variety of public collections including Tate; the Arts Council; The British Council Collection; South London Gallery; Victoria and Albert Museum; Stedelijk Museum, Amsterdam; Seattle Art Museum and the Museum of Contemporary Art, Sydney.