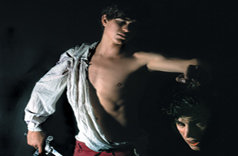 Union is pleased to present the first solo exhibition of London based artist Matthew Stone. Emerging from a strongly collaborative South London squat-scene of young artists, actors, writers, musicians, moviemakers and designers, Stone produces chiaroscuro laden photography, dramatically portraying friends and night-time players stripped of context-locating clothing, draped in cheap fabric swatches, and locked in self-absorbed states of romanticised visionary ecstasy. His photographic images assert a deadpan observational tone, whilst simultaneously proposing a heightened version of what is already present: taking a step back to revel in the dynamic, the construction of a particular image, and the amplification of the inherent mythologies underpinning his subjects.

Playfully assuming the role of shamanistic lightening conductor for the energies of his collaborators, much of Stone’s multi-disciplinary practice assumes a similarly non-didactic position to his photography in order to reveal how stories are told and history is made. Often focussing on revealing the mechanics of media manipulation and the creation of cultural ‘product’, his artistic engagement with socially and philosophically conflicted situations is mediated through forms of entertainment and performance: helping stage several hugely ambitious evolving, inclusive ‘happenings’ of sometimes none, sometimes 2000+ attendance for instance - events which have since assumed the mantle of London urban legend.

Stone’s central concern, ultimately, is with people, place and community. The resulting work reveals the fragmented identities, cross-cultural negotiations and relationships between culture and history we all navigate on a daily basis in the reality of our broadband, interconnected present. There is a sense you could become privy to some important but just-out-of-reach information, of perhaps attaining admittance to an inner sanctum. The oppositional tension inherent in the construct of Stone’s work, the fractured multiplicity of visual language, location of place and time only serve to heighten the construct. In doing so, the contradictions could provide a truth or at least a further starting point: that every situation, no matter how well you think you understand, is more complex than you often allow - at once seductive and frustrating in equal measure.