A show in the context of international photography festival 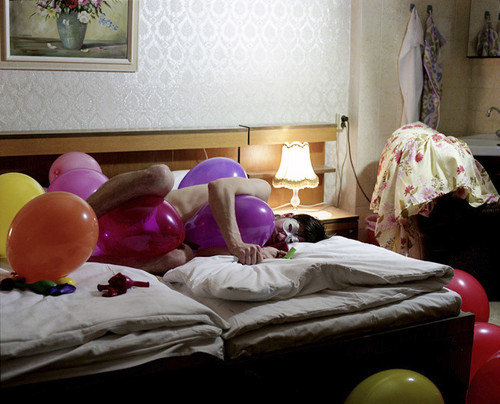 The artist and his environment
"Synthetic" and "Nature" - both terms could not be more differing. In the selected images of ten Norwegian artists who form the exhibition, nature is not merely a mimetic depiction of itself but a set of staged nature-alike images in the guise of an invisible collage not to be mistaken with reality.

Besides the classical concepts of an intact and untouched nature, Leif Magne Tangen, the curator of this exhibition, is presenting artists who are looking at their immediate living environment in order to reflect on 'urban nature'. The series "Painting the Clouds with Sunshine" by Per Christian Brown is showing a masked young man sitting on a bed in an unsophisticated hotel room, scattered around him are balloons. This image is a metaphore for the young man's own material environment which he recreates as he likes by adding and synthesising new (artificial) elements.

Image: Per Christian Brown, Painting the Clouds with Sunshine#1, 2006