On show a selection of works from the ongoing series of photographs entitled 'Love', taken in Uganda. Bhimji's photographs are records of absence alluding to loss and the passage of time on a universal level. We see empty landscapes and deserted buildings that witness human activity interrupted and abandoned. 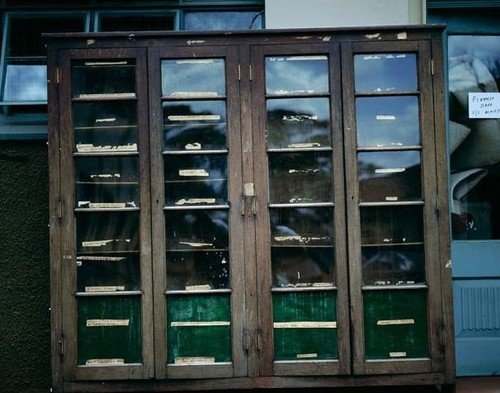 Zarina Bhimji (born in 1963 in Uganda, lives in London) works across a wide range of media including installation, photography, film and sound. For her exhibition at Haunch of Venison she will present a selection of works from the ongoing series of photographs entitled 'Love' (1998 - 2006). The photographs were taken in Uganda as part of the research project that also led to her internationally acclaimed film 'Out of Blue', commissioned by Documenta XI in 2002, but constitute a separate body of work. Bhimji's photographs are records of absence alluding to loss and the passage of time on a universal level. We see empty landscapes and deserted buildings that witness human activity interrupted and abandoned. They tell of large-scale betrayal, love, grief, violence and spirituality with great tenderness and an atmosphere of subdued sadness. We are however not confronted with the catastrophe itself, or the memory of specific events, but with the disappearing of both the catastrophe and its memory, and the emergence of something other.

Although the starting point for Bhimji is thorough research, the resulting works are at a distance from specific historical facts. Rather than interpreting or documenting history, the emphasis is on creating new images from which different ways of seeing and understanding can emerge. Investigations into official records, legal documents and personal narratives are undertaken but left behind in an attempt to instead make sense through the medium of aesthetics. Working intuitively, Bhimji approaches the landscape through concerns such as composition, colour, light and texture to create carefully constructed, intensely beautiful and poetically resonant images.

In works such as 'Howling Like Dogs, I Swallowed Solid Air' (2003), 'Cracked Earth' (2006) and 'Spider Score' (2006) the evocative titles work with the images to capture the specific atmospheres of different places. Bhimji transforms the physical into the psychological through an extraordinary sensitivity to difference in its various forms; paying attention to the changes in tone and temperature of the sunlight, or the way a shape unexpectedly echoes another in a seemingly random arrangement of objects. Catching the weight and colour of the sky just before an approaching rain storm, the intricacy with which a spider's web extends between the branches of a tree, how years of humidity and neglect have made paint crack and peel off the walls of an empty building, the photographs give poetic form to intense inner feelings which by their nature defy representation. Trying, in the artist's own words, to "speak the unspeakable that wants to be spoken", the images can be seen as transferences of emotional states through visual language. The artist is currently working on a new film commission taking its starting point in the trade and immigration routes across the Indian Ocean between India and Africa.