Athanasios Argianas - Nick Laessing. Theyr works reflects the artist's interest in revisiting the past and their shared struggle to grasp expanding technological advancement as a means of communication. Science becomes sorcery where there could be slippage between fact and fiction. Curated by Milika Muritu. 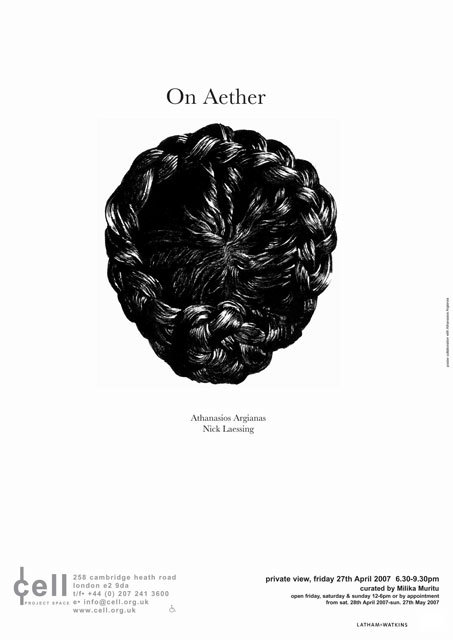 Cell Project Space continue their international programme by bringing together two artists who although educated in London, now migrate between 3 cities London, Berlin & Athens. They represent a growing generation of artists who have moved to work in European cities that have had struggling post war economies, where much of the rich cultural history of the area has been left dormant and unchanged. The work presented in ‘On Aether’ reflects the artist’s interest in revisiting the past and their shared struggle to grasp expanding technological advancement as a means of communication. For Nick Laessing & Athanasios Argianas their work is part of a lo-fi enlightenment, a programme of discovery via experimentation. Science becomes sorcery where there could be slippage between fact and fiction. Both artists work within a framework of proposal or collaboration, which often creates a device for the layering of authorship. Motion and Energy is claimed via strange and convoluted hypothesis. Much of what is exposed is selected and carefully prepared evidence inviting the audience to enter into the artists’ fiction.

In the past much of Athanasios Argianas’ installation works take the form of furnishing, storage devices, and audio equipment to either intervene or suggest intervention with the audience. He also invests in clear allegorical depictions of early 19th century scientific discoveries, such as August Ferdinand’s Möbius Strip; repeating images of women’s hair braids and plaits in the structure and form of various complex Möbius Strip patterns, painted in the style of the romantic setting that the mathematical theory was discovered. His new work created for the exhibition hovers between an unbound book and a collection of prints which will be accompanied by text, 'On The Condition Of Music (Draw a Circle And Follow It)'.The work is a project the artist has been working on for the past year and is based on collected ideas for ‘unrealisable projects’ (works that could only materialise as suggestions drawn on paper).

For his first exhibition at Cell Project Space Nick Laessing will produce a film documenting the life of Viktor Grebennikov (died 2001) who was a biologist at Novosibirsk State University Institute for Agriculture. From an early age he became fascinated by insects and throughout his life collected specimens of insect life, amassing a huge collection. As a talented artist, environmentalist and inventor, he made many studies of the insects in their landscape that became his life long interest. A museum situated within the Institute for Agriculture is dedicated to his work where his paintings, drawings and scientific inventions are on display. Towards the end of his life in 1995 Grebennikov wrote a book published in Russia called ‘My Life, Victor Grebennikov’. In this book, which contains many of his illustrations, he tells the story of his life and makes some extraordinary claims. In 1988, while studying a certain insect he chanced upon whilst collecting specimens, he claimed to have discovered a phenomenon of biological anti-gravity or weightlessness. Subsequently he constructed a small flying platform that utilised the hitherto unknown power in the chitin (the exoskeleton of this insect). Secretly experimenting with his mysterious new technology, he made flights about the local countryside. He claimed to achieve speeds of up to 25 km per second and could have gone much faster, but for the flimsy construction of his device. Since his death, the legacy of his story has developed myth-like proportions in Russia. During Laessing’s trip to the city of Novosibirsk he met and interviewed Grebennikov’s ex students, friends and colleagues and visited the university and woodland habitats where he worked in an attempt to create a portrait of the scientist and to find out more about his claims.

This work is a continuation of Laessing’s previous interests in unproven scientific phenomena, such as the work ‘Energy Generator’ Olivia Plender’s Top Ten ArtForum April 2006 ‘Nick Laessing is currently searching for that holy grail of science: the perpetual motion machine. The quest has led him to Switzerland (where a religious cult claimed success), to scientific conferences, and finally to his own studio—where he constructed a model on an existing patent. Chronically underfunded, research into free energy is the preserve of autodidacts and scientists on the margins, recalling the ideological endeavors of “cranks” like Buckminster Fuller and nineteenth-century amateur scientists, who made significant discoveries (like electricity) before the scientific community closed ranks against outsiders’.

In 2000 Argianas & Laessing collaborated on works at the Timothy Taylor Gallery & in the publication ‘Guest Room’ in 2006. ‘On Aether’ will continue their collaborative spirit. Laessing exhibited in Mary Mary, Glasgow in 2005 and was one of the founding artists of Hobbypopmuseum. In conjunction with this exhibition Athanasios Argianas will have his first solo exhibition at Max Wigram Gallery and is represented by Breeder Gallery, Athens. He took part in the group show 'Pale Carnage', curated by Martin Clark at The Arnolfini, Bristol earlier this year.