"The ponies had begun to veer off from the herd and the drovers were beating their way toward this armed company met with on the plain.Already you could see through the dust on the ponies' hides the painted chevrons" (Cormac McCarthy). Group show curated by David Hunt. 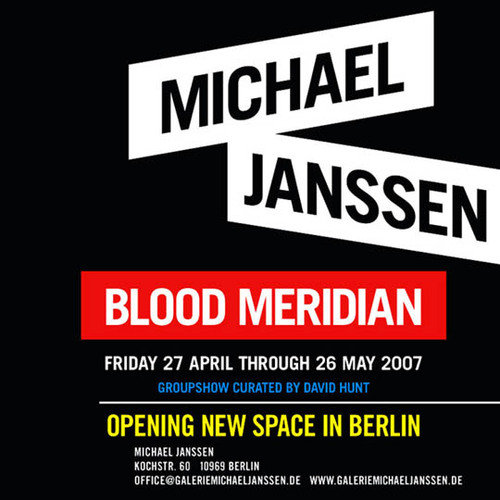 “The ponies had begun to veer off from the herd and the drovers were beating their way toward this armed company met with on the plain. Already you could see through the dust on the ponies’ hides the painted chevrons and the hands and rising suns and birds and fish of every device like the shade of old work through sizing on a canvas and now too you could hear above the pounding of the unshod hooves the piping of the quena, flutes made from human bones, and some among the company had begun to saw back on their mounts and some to mill in confusion when up from the offside of those ponies there rose a fabled horde of mounted lancers and archers bearing shields bedight with bits of broken mirrorglass that cast a thousand unpieced suns against the eyes of their enemies.

A legion of horribles, hundreds in number, half naked or clad in costumes attic or biblical or wardrobed out of a fevered dream with the skins of animals and silk finery and pieces of uniform still tracked with th e blood of prior owners, coats of slain dragoons, frogged and braided cavalry jackets, one in a stovepipe hat and one with an umbrella and one in white stockings and a bloodstained weddingveil and some in headgear of cranefeathers or rawhide helmets that bore the horns of bull or buffalo and one in the armor of a spanish conquistador, the breastplate and pauldrons deeply dented with old blows of mace or sabre done in another country by men whose very bones were dust and many with their braids spliced up with the hair of other beasts until they trailed upon the ground and their horses’ ears and tails worked with bits of brightly colored cloth and one whose horses’ whole head was painted crimson red and all the horsemen’s faces gaudy and grotesque with daubings like a company of mounted clowns, death hilarious, all howling in a barbarous tongue and riding down upon them like a horde from a hell more horrible yet than the brimstone land of christian reckoning, screeching and yammering and clothed in smoke like those vaporous beings in regions beyond right knowing where the eye wanders and the lip jerks and drools. Oh my god, said the sergeant."