Cellular network operator, MTN, in conjunction with the MTN Art Institute and Camouflage (Centre for Contemporary Art of Southern Africa) have announced the four nominees for the recently launched MTN New Contemporaries Award for new and emerging South African artists.
The four nominated artists are Usha Seejarim (27) from Johannesburg, Shannin Antonopoulou (24) from Johannesburg, Marlaine Tosoni (27) from Pretoria and Thembinkosi Goniwe (30) from Cape Town. 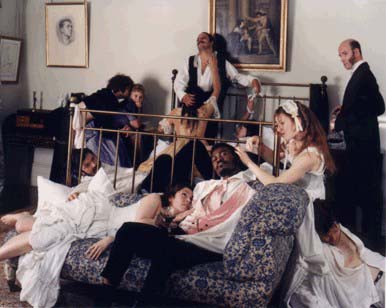 Cellular network operator, MTN, in conjunction with the MTN Art Institute and Camouflage (Centre for Contemporary Art of Southern Africa) have announced the four nominees for the recently launched MTN New Contemporaries Award for new and emerging South African artists.
The four nominated artists are Usha Seejarim (27) from Johannesburg, Shannin Antonopoulou (24) from Johannesburg, Marlaine Tosoni (27) from Pretoria and Thembinkosi Goniwe (30) from Cape Town.

They have been invited to show a selection of work at an exhibition to open at Camouflage Gallery on July 27, 2001, when the winner of the award will be announced. The exhibition will run until September 15, 2001.

Usha Seejarim will be showing a new video projection and several stills from the video. Seejarim's video and paintings infer an aspect of illusion that brings to the fore questions of reality. It can be likened to the sensual experience of watching slide images dance before your eyes. Seejarim's video projection documents shadows of cars in the early morning traffic on the M1 South into Johannesburg. The images in the video of shadows suggest the passing of time evoking memory, ritual and the poetry of the everyday.

Shannin Antonopoulou will be making a new site specific installation in the gallery for the MTN New Contemporaries. In her installations Shannin creates spaces where the viewer is engulfed with wallpaper type patterns. The patterns the artist uses are reminiscent of the domestic wallpaper used in the sixties and seventies that portray Shannin's early childhood experiences. The artist spent her childhood growing up in her grandparent's suburban middle-class home, and visiting her extended Greek family in Yeoville.

Marlaine Tosoni explores the use of video as a means of disarming the viewer through strategic tensions that are set up between the real and the fictive within the plot of her films. The artist draws references from her immediate environment, friends and film history. There is something violently disturbing and paradoxically voyeuristic about the images that Tosoni edits together.

Thembinkosi Goniwe will be presenting a video projection entitled: XYZ and works from the Face Value series. Thembinkosi's work is an attempt to hold traditional rituals (ulwaluko, ukuchaza and ingqithi) up for contemplation and to examine the influence of contemporary art and culture on them. In the urban areas, these rituals are fast disappearing and their meanings are becoming shadows not acknowledged by Western dominant culture. In the video performance titled XYZ, the artist represents these ritual practices reflecting on the sacred, making it visible and consumable. The work is intended to communicate new insights and experiences that may stimulate social awareness necessary for social change. In the series 2.

Face Value, Goniwe draws from popular magazines such as Bona, Pace, Thandi and Drum. Goniwe critiques the imposed stereotypes that result from print and advertising media.

What also distinguishes this award from others is that each year will see the appointment of a different curator to select the emerging artists for the Award. Clive Kellner, critic and director of the Camouflage Contemporary Art Gallery, was appointed as curator for this the first award.

Says Kellner: " The award goes beyond the prize money of R20 000. It is a valuable mechanism for the construction and promotion of a new identity in South African culture. "The MTN New Contemporaries Award is about defining a moment in the development of contemporary art in South Africa today.

The MTN New Contemporaries Award is a curator-driven award that explores relations between curator and artist. The award will offer an opportunity for museums, corporate and private collectors to invest in the next generation of South African artists. It will also be a useful tool for researchers, curators, critics and journalists."

Kellner says that this year's selection of four artists reflects the cultural diversity and range of practise of an emerging generation of artists.

"Each of the artists, although representative of their generation, is not individually preoccupied with major political concerns. They understand their roots and traditions but are comfortable with extending beyond their traditions.

"Their tradition forms a comfort zone from which they explore new media, identity and existence. The notion of 'home', telling stories, being and daily life are predominant themes that recur in the respective artists' works. Theirs is a world of information, transformation and experimentation."

Ronel Loukakis, director of the MTN Art Institute says that the MTN New Contemporaries Award ties in perfectly with the MTN Art Institute's vision, which is to promote and assist with art education through various outreach projects and to provide opportunities to young emerging artists.

"We identified a great need to acknowledge and recognise emerging South African artists who have not yet received critical acclaim but have the potential to become the next generation of South Africa's acknowledged artists.

"There is a period in the development of most artists where it is difficult to receive support, have solo exhibitions or be integrated into the larger professional system," says Loukakis. "We are trying to fill that gap through the MTN New Contemporaries Award," she says.

in partnership with
MTN Art Institute

Prince Claus Fund for Culture and Development
Arts, Culture and Heritage Services of the City of Johannesburg